I get an interesting email from Daughter this morning. She says she’s used the exact words 'the heating does not need to be on, if you're cold put on a jumper' to her housemates. She thinks she’s turning into me. I’m so proud. Though such frugality was not apparent the last time I looked at her bank balance. 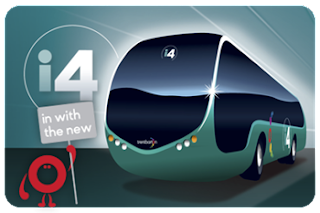 Have they achieved a sponsorship deal with a certain computer company who is fond of putting ‘i’ on the front of everything? I doubt it.

Well, I hope they keep the number ‘4’ as prominent as it is now because the only problem with the rebrand of the old 'Rainbow 5', now known as the ‘Indigo’, was that they removed the '5' off the front of it. Now, in the dark it is almost impossible to tell the ‘Indigo’ apart from all the other buses with ‘Nottingham’ on the front until it practically runs you over. Hopefully they won’t make the same mistake again... but I’m not confident.

I have a committee meeting of the dog club tonight, where I get a few more things passed and a few more ideas planted. The quiet revolution continues.