Easier Than Getting Olympic Tickets

I abandon the idea of biking today due to the heavy rain, the gales and the increasing occurrence of snow showers. There are light coverings in various places around here but some cars are driving around with a couple of inches on them. Up in Scotland Cairngorm and Lecht have reopened for skiing.

Once the snow passes over our back garden begins to resemble a lake, albeit a very muddy one. It all brings back ‘fond’ memories me of the Milton Keynes Half Marathon. Thankfully we have a nice cosy barn in which to shelter for our dog training tonight. Hmmm. I’ll pack an extra jumper.

Instead of biking, I take L’s bike in for a service.

It’s the first day of the Track Cycling World Championships today from Melbourne, Australia. As usual the BBC coverage is mixed. Excellent live coverage on the red button and over the internet but rubbish highlights.

There's a sort of unexpected but brilliant Team Pursuit gold for the men, I really didn’t think we’d beat the Aussies but they did, twice. They qualified fastest and then went on to break the world record against them in the final.

Even more unexpected was the Scratch Race gold for Ben Swift. A man left out of the Pursuit Team getting his just rewards. 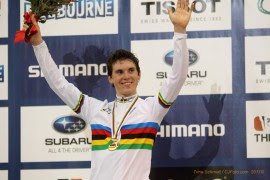 Disappointment in the Team Sprints though. The women, who broke the World Record a month a go, came in fourth but the men looked promising with a German, the repatriated Philip Hindes, on the first leg despite getting disqualified.

I propose to L that we head to Minsk next year, as they’ve just awarded the 2013 Championships to Belarus. Belarus is Europe’s last remaining dictatorship, so it could be an interesting trip, if we can get a Visa. Still, it’s got to be easier than getting Olympic tickets.