It’s the fourth running of the Paws 10k at Cotgrave Country Park this morning and, for the first time in those four years, those with paws are allowed to run. How could I deny MD this opportunity? I couldn’t. I’m sure Doggo would have liked to have done it too but sorry mate, this is MD’s gig.

My calf is definitely much improved but being dragged around 5k by the manic MD will certainly be the acid test. If the injury can survive that, then tomorrow’s Worcester Half Marathon is a mere formality.

First though, the pre-race warm up. 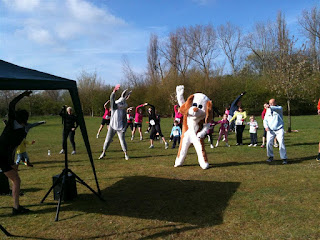 There are around a dozen of us and they set everyone off at five second intervals, meaning some mathematics will be required in adjusting the finish times. I’m a little disappointed not to get a mass start, as they are always fun but perhaps they are just being annoyingly sensible. Perhaps they’ve just taken note of MD.

He is a tad excited at the start, well I interpret his noisiness as excitement, it could have simply been annoyance at his Saturday morning lie-in going astray. Perhaps he’s just trying to unsettle the opposition. It works, everyone seems to be backing away from us, moving us nearer to the front.

Then we’re away. I try to hold him back, for his sake and for the sake of my dodgy calf but it’s no good, he won’t be constrained and I decide to go with the flow, his flow.

I have my best, newest, most cushioned, most expensive running shoes on as I know the Paws 10k is always on solid grit tracks. They omit to tell us that the 4Paws run isn’t, it’s across muddy grassland instead, so I wish I’d gone for some older footwear. It’s also not terribly well marked or marshalled. We gain a place as one of the ‘professionals’ an aggressively attired Cani-X refugee appears from behind a bush, seemingly having gone the wrong way. At least at the finish, that’s what she claimed she was doing behind the bush.

The race does seem to be a bit of an afterthought, or forethought as we’re before the main race, and I didn’t think the organisers took it terribly seriously. Not like MD, he’s deadly serious.

We cross the line in fourth, I think, where we are congratulated by a six foot tall fluffy dog, which MD eyes suspiciously but keeps his cool. Our position is adjusted down to fifth when the start times are checked. I’ll need to double check that on the official results, if there are any. I have my doubts. As I say, I didn’t think the organisers took it terribly seriously.

Having apparently sabotaged L and Doggo’s run at Catton last year, they get their own back as Doggo supports us over the last fifty metres or so causing MD to run this last stretch backwards, barking his regards to Doggo. That probably cost us fourth, which still wouldn’t have been good enough for a podium place but it's good enough for a bag full of dog treats.

After all that excitement, there’s not really much point putting on the main race as anything else is going to be an anticlimax but they do anyway. 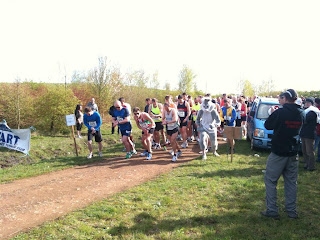 L claims to be saving herself for Worcester but clocks just over an hour on a course that to me (last year) didn’t seem quick despite its relative flatness.

I head off to the match which is a must win affair for both Middlesbrough and Derby if either are serious about landing a playoff berth. I get the impression they are and we aren’t. At least nobody at the club has ever seriously mentioned the playoffs this season. Boro win 1-0.

A night in, Worcester tomorrow.