A bit of trek today up to Arley Hall, Northwich for this weekend’s dog show entertainment. It’s very muddy underfoot but at least it’s not raining. Getting on the paddy field that doubles as the car park was a bit of an event, as I’m sure getting off it again will be.

Meanwhile L stays local and does one of the many Wollaton Park 10k’s, in one hour and two tenths of a second. Oh dear, how frustrating. She’s not happy.

We’re not happy either. In his first run MD has pole 16 of 19 down. He also broke his ‘wait’ but somehow we got away with that and made it around to the fourth last. So not bad really but not good enough.

His second run however, a qualifier, was just embarrassing. He should apologise to Doggo as that was the main reason we chose this dog show, where there is no Veterans class for Doggo as opposed to another show elsewhere where there would have been. Our third run is less embarrassing but still not worth mentioning. Time to take our training back to the basics I think.

We’re all done before lunch. So we head home whilst there’s still some grass on the car park.

We drop in on my folks, as its Father’s Day tomorrow and also to get my Dad to wear the boys out, so that L and I can go out on the town tonight while they sleep.

We go to the Ropewalk for tea, where my meal choice is off and so too by association is L’s, as she picks the same as me. Bad call. They twice try to serve me the wrong beer and on the second occasion succeed, so it’s a rare bad night in there. We move across the road to the Borlase and the Everard’s Original. 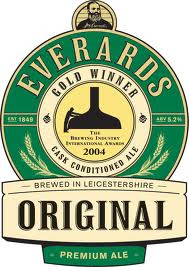 We’re well settled until the barman tells us the gas has gone. On a handpull? Really? I think he just wanted to go home early. So back across the road to the Hand & Heart for one for the road.