Today the race they call the Barrathon. 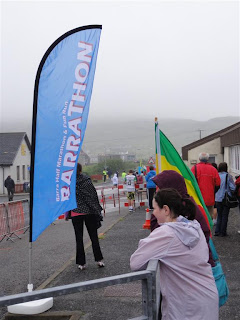 A 13.1 mile tour of the island that takes you clockwise right around the main and only road. It starts and finishes from Castlebay School where they have the flags out, literally. 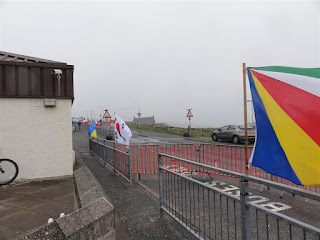 Castlebay so named because somebody has submerged a castle in the middle of the bay. 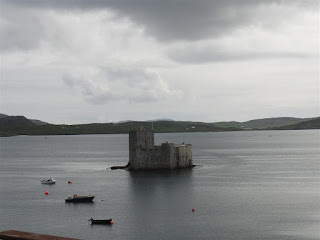 The day starts drizzly but fines up sometime around the start of the race, I’m so ‘focused’ aka terrified that I don’t actually notice the precise moment that this happens. Terrified perhaps because everyone is taking about the hill they call Heaval, which appears to be some Gaelic misspelling of the coming together of the words ‘hell’ and ‘evil’. We have been warned.

‘Just like Leek then?’ L quips ‘but with a few downhills by the sound of it’. She really didn’t like Leek.

To make matters worse I’m still trying to fight off a touch of cold that I’ve brought on holiday with me and I’m feeling well bunged up, which could make panting in exhaustion difficult.

True to expectations the race is very lumpy although it actually starts downhill but that’s just a ruse because we’re soon going uphill. Then down, then up, then down, then up, it’s like a tarmac rollercoaster and there’s no way to get off. They’re not big hills but the sheer lack of flat gradually wears you down.

At around 10.5 miles we start the climb up Heaval, a climb apparently described as a bit like pushing a wardrobe uphill. Unfortunately I have forgotten to empty my wardrobe before I started pushing it and my demons quickly come tumbling out of it, falling on top of me. I’m also hyperventilating; my touch of cold is getting touchier. So I walk up part of the Evil-hell but believe me it’s almost as quick as running up and I still overtake people. Finally after about a mile of climbing, the ‘hill’ tops out at around 340ft and then it’s downhill to the finish, Wa-hey, or so we thought.

There’s a final short sharp kick uphill just before the finish and on the top of this unwelcome distraction a morbid crowd has gathered simply to laugh at these mad people.

Finally it’s over. 1:45 isn’t good but in the circumstances, not too bad either. I retrieve the dogs from the car and we sit somewhere, I can’t stand, to wait for L. 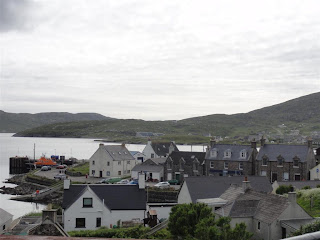 Post race they serve us with an amazing buffet, which consists of everything you could possibly imagine except for the one thing I’m really gagging for right now. A humble cup of strong tea. Shouldn’t really complain, they have bottles of Hebridean at the bar. No draught obviously.

In the evening there’s a Ceilidh, that's a knees up I believe but my knees won’t do 'up' tonight and we ought to spend time with the dogs anyway so we skip it.