In Need Of Better Kit

It’s the middle of June, nine days from midsummer’s day and it’s positively chilly on the bike this morning. I employ arm warmers and make a mental note to put the fingerless gloves back in the drawer as my fingers are positively freezing.

Meanwhile, L reads the clock wrong, gets up too early and manages a massive 50 lengths in the pool. Just shows what you can do.

In the news, wind extinguishes the Olympic flame on the Hebrides... not surprised but it didn’t blow our camping stove out, so they obviously need better kit.

Tonight, as the weather looks like it’s going to be dry, although not exactly sunny, we try and book tennis. That is if I can get anyone to answer the phone at the tennis centre. Which I can’t.

So we simply turn up and attempt to play. This confuses them a bit. Partly because they have a tennis tournament on... the Aegon Trophy I think, no that was last week, this week’s it’s the Aegon Challenge. Not to be confused with the Aegon Classic that’s going on in Birmingham and in London or the Aegon International that's coming up in Eastbourne. Don’t you love ‘brand’ awareness, making you aware of the brand but totally unaware of what is actually going on. We used to have the Nottingham Open, that we understood.

Anyhow, that’s all on the grass, so we should be able to get a hard court but apparently these have all been booked for practice by the players, who haven’t turned up... Hope they’ve paid. They make us pay for non attendance.

We get a court and it’s relatively pleasant, for saying its tennis. I’m not a huge fan, not since they made the courts smaller or so it appears since my childhood. 6-4 6-2. I think. I ran out of legs a bit in second set, what with the cycling today. 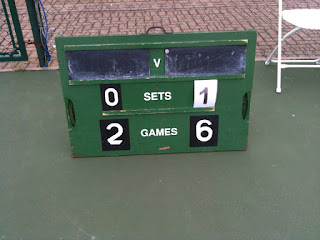