I travel down to Maidstone for work today. L describes this as a ‘jolly’. It was originally touted as being an overnighter but in the end, it turns out to be a day trip e.g. three hours plus to drive down, three hour meeting, three hours back. So not very jolly at all, and we’re there to talk sewage. Even less jolly. Plus I’ll probably miss dog class.

In fact the journey down is more horrific than we thought, involving a bail out from the static M1 to the static A14. Then to top it all, when we get there, they serve us KFC for lunch.

Apparently the country as whole eats too much of the likes of KFC, whereas you would have thought the most effective way of keeping people out of KFC would be to give them one to eat, as it was truly disgusting but clearly, for reasons I don't understand, this doesn't appear to a deterrent.

The trip back is a lot quicker and I’m back in time to make dog class, just about but L suggests I bunk off and is very persuasive. I didn’t fancy another hour or so on the roads anyway.

Of course there’s also football to watch. The tournament has been good so far but the main thing that has spoilt it for me is the lack of national kits. The whole of Spain turned up tonight in their traditional red, whilst the team themselves ran out in pale blue for no apparent reason. 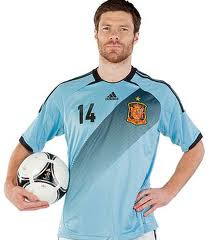 I don’t think I’ve yet to a game where both teams have been both wearing the right kit.

England are one of the worst for this. They’ve not only left their blue shorts at home, forcing them to play in all white but also their entire red/white second kit. Sack the kit man.