We’re off to Western Isles tomorrow so I hope the car passes its MOT today. Kind of essential really.

After stocking up on a few food items for the trip, I head off straight from work to Birmingham where the Editors have announced their only UK date of this year. Well that was until they announced another one, the day before. Already I feel a little bit cheated.

I really ought to be at home packing, as isn’t that what you’re supposed to do before a holiday. I’ve never been much into packing; some people can takes weeks over it. L has already announced her packing as complete. Three books, a few toiletries, a t-shirt with Nottingham on it and several woollies. No short skirt this time? I shall be following a similar strategy, although without the short skirt and also without the books. We travel light but I must remember to chuck in a bag of dog food and the tent.

It’s my first time at the HMV Institute in Birmingham. I like it. It’s a nice tight little venue which looks like an ornate old theatre but was actually built as a Methodist congregational chapel. Sort of appropriate for the locals who have come to worship Tom Smith and co.

First though, a couple of support bands and it’s good to see that the Editors have kept these local.

Swim Deep apparently make ‘sun kissed noise’, so their Facebook says. Well perhaps grunge kissed and as if to emphasise the point the singer is in his Nirvana t-shirt. Meanwhile the bass player appears to have pyjama bottoms on. Must be students.

They make a nice racquet though, although perhaps too much keyboard, at one point I thought they’d got Jean Michel Jarre there on the ivories. The overall effect is not unlike early Editors at times. So on safe ground then and oh he can spit wine upwards over himself. Yeah, must be students. 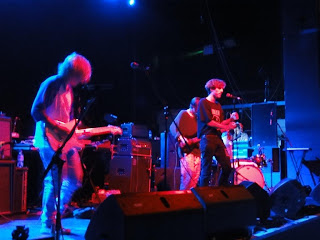 What can you tell from a band’s t-shirts? Well now we have support band number two and a Sonic Youth number adorns their bass player. This is Victories at Sea, who open with some frenetic drumming and a mostly instrumental number which is actually pretty epic. Then the bass player goes on the keyboards, then the drummer goes on keyboards and in his place we get a drum machine, then the drum machine goes on keyboards... only kidding. In between the musical chairs they make almost gothic soundscapes but their songs have a bit of everything, which means they sound like everybody and yet nobody.

Sadly they did slide a bit into the ordinary after a very promising start but certainly a band to watch out for. Not only that but they were handing out 200 free CDs at the end with unique Polaroids on each. Nice lads all round. Sadly such was the scrum for these that I didn't get one. 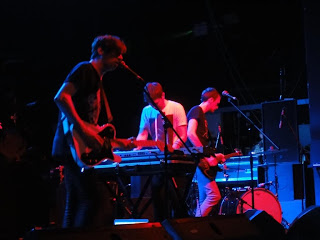 As tonight's gig was primarily marketed to the fan base I was sort of expecting something a bit different from the Editors but that’s not really what we get. True we get four new tracks but two of those ‘The Sting’ and ‘Two Hearted Spider’, part of the encore here, have been around for a year or more. The other two ‘Sugar’ and ‘Nothing’ bookend the set.

‘Sugar’ is a dramatic and an intimate way to start with Tom Smith at the piano delivering a brooding song that shows that whatever is new about the Editors it will still include a good dose of darkness. The piano continues with the unmistakable introduction to 'Racing Rats'. 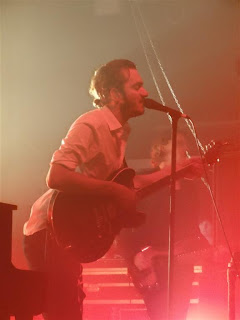 This starts a bit of a crowd pleasing run through of the hits, which as part of the point of these gigs is to warm up for a couple of foreign festival dates is understandable but I expected a bit more tonight.

New guitarist syndrome I guess. The old chestnut of musical differences has seen off former lead guitarist, keyboardist, eye candy (so I’m told) and possible driving force Chris Urbanowicz. How important he was to them will, I guess, become clearer in time. One compliment paid to him tonight is that it takes not one but two people to replace him. Tonight the Editors are a five piece. 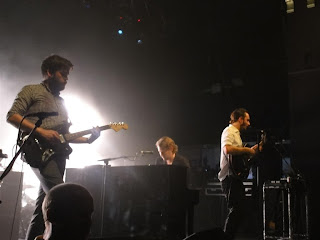 Perhaps I’m being a bit over critical about the set. We do get the not often played ‘Fall’ which is massive. Beautiful. ‘You Are Fading’ goes down a storm and a new version of ‘The Weight Of The World’ equally so, literally sending shivers down your spine. Otherwise it’s a set a bit short on surprises for saying it was a homecoming one off. Well, two off and the main set is exactly the same both nights.

There are also new versions of some songs, perhaps out of necessity. ‘All Sparks’ for one has been given a right spanking. In fact Tom introduces it as a ‘new song with an outrageous bass solo from Russell’. Hmmm, not sure what I think to that, so moving on quickly to the always outrageous ‘Eat Raw Meat = Blood Drool’.

Performance wise you can’t fault them and they are clearly loving it, we get repeated thumbs up from the band, which is better than a thumbs down obviously but I do wish they’d shift Tom’s piano to the side and some of their other mountain of kit while they’re at it. There’s a drummer in there somewhere fighting to get out. 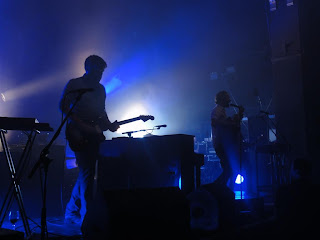 They leave us with nothing, the previously mentioned ‘Nothing’, the most immediately impressive of the new ones. Then as they leave the stage we discover that none of them can manage to flick a guitar pick as far as the front row. Lightweights. The bouncers have to scrape them up off the floor and hand them out. 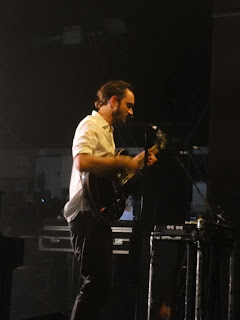 The encore starts quietly as Tom returns alone for his Twilight moment and ‘No Sound But The Wind’. Then ‘In This Light...’ builds things up further before ‘Munich’ blows everyone away, only for the newbie ‘Two Hearted Spider’ to make things feel perhaps a bit overblown.

But then as the closing and reworked ‘Papillon’ demonstrates, the Editors are still very good, still have their great energy but yet they’re now sort of different. Time will tell if this is progress.