Benbecula is the next island to North Uist but is actually connected via a causeway. As is South Uist. Then there are the islands of Berneray (linked by causeway to North Uist) and Eriskay (linked to South Uist), so you can island hop across five islands without even, well, hopping. In fact there are more smaller linked islands, which we’ll have to research further on our next trip. 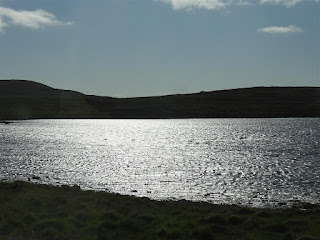 So we ‘hop’ on to Benbecula this morning and to a place called Liniclate where a compact field of 77 runners is assembling for the race. It’s sunny again but it’s also windy, something which is probably an ever present factor on these islands. It is noticed that they leave putting up the start/finish signs and the mile markers until as late as possible. Probably, lest they blow away.

Then at about 11am our debut in the 23rd running of the Western Isles Half Marathon series gets under way.

The course is mildy undulating with that strong Hebridean breeze to keep you alert. The mostly straight roads mean that you can at least you can see who you’re stalking.

It’s actually a surprisingly quick course, perhaps because despite the frequent head winds, once it gets behind you, you can really start to fly.

I team up, accidently, with another chap, who puts me to shame because he's far older than me but we pull each other along for most of the way. That is until two miles from the finish when I spot a Wrekin Road Runner, a fellow Sassenach who's come as far as we have. The urge to beat him spurs me onto a good finish.

My time of just over 1 hour 40 minutes is excellent, my best for some time but I worry about a suspiciously quick last mile of 6:30. Not something I thought I was capable of, in fact something I’m sure I’m not capable of after 12 miles, so perhaps I took a wrong turn somewhere and accidentally cheated.

Then there’s a free swim for all runners but neither of us partake. It would be a bad tactical move anyway as this would give others a head start on the huge post race buffet. From which the best cakes seem to get picked over very quickly. I did wonder why some folk started with the cakes and then worked their way back to the sandwiches and soup.

Afterwards we return to the only pub on North Uist, Westford Inn. If there is one on Benbecula we didn’t find it. 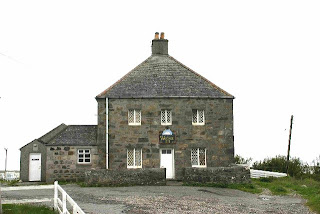 The Red Cuillin turns Black midway through the evening and with the Blaven now having fully ‘turned’, well, gone off, it’s the Black Cuillin that we take back to the tent tonight.