We still have no door to the living room, which would only be a problem to anybody who has muddy dogs, which we do. Considering the current weather, muddy is an understatement. It’s the weather’s fault that we still have no door as I’ve been unable to get outside to cut the necessary centimetres off it. Whenever I’ve been at home it’s either been too wet or too dark to do so.

Tonight we head to Broadway where we renew our lapsed membership. It’s a bit of a shock to find it’s increased from £32 to £50. They’ve also axed the free drinks vouchers, although we still get two free films. Even so I reckon we’re going to have to see eight films to get our money’s worth, it used to be only three. Unless we eat there more often, for which we get an additional discount. Which is what we do tonight.

Then we see ‘Safety Not Guaranteed’. The film is based around an actual classified ad about a chap looking for someone to travel back in time with him.

Presumably it was placed as a joke but the film has a journalist called Jeff (Jake Johnson) investigating the ad, to find out who is behind it but more importantly to find out how crazy they are. Jeff takes with him two less than eager interns Darius (Aubrey Plaza) and Arnau (Karan Soni).

They can do most of the leg work because Jeff's own interest is limited. He has an ulterior motive for going; he intends to go back in time himself because the town they are heading for is where his ex-girlfriend from college lives. He doesn't need a time machine to attempt to start up with her again, just a good excuse.

Once there the three of them take the odd approach of not actually replying to the ad but instead stalking the guy by finding out where he lives and works, then asking him outright if they can be his time travel partner. When Jeff has no success, Darius has a go.

Kenneth (Mark Duplass) is undoubtedly the local misfit but Darius finds him oddly appealing and the more time she spends with him, the more of a connection she forms with him. He's going back to 2001 to save a girlfriend who was killed in a car accident. Only she wasn't and as we find out, still lives nearby. Darius has her own reasons for wanting to travel back, to prevent the death of her Mother. 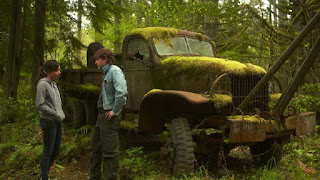 Meanwhile Jeff achieves his aim, gets to hook up with his ex, beds her and then falls out with her. Making it all a bit pointless plot wise. There's another sub-plot concerning Arnau. He's painted as your typical nerd in horned-rimmed glasses who is uncomfortable with women. So Jeff sets him up with some girls.

Although largely unnecessary these diversions follow the same sort of theme e.g. looking at relationships involving people who are quite different e.g. nerds, misfits/weirdoes, damaged females or annoying jerks in Jeff’s case, saying perhaps we should just accept people as they are. This does take screen time from the main story, which, to be honest, is the old one of where the damaged female falls for the misfit. Yep, I've just duped myself into seeing another RomCom.

This one though does have good characters. It's also better written and has more to offer than what you might expect. The time travel angle is more a façade for finding oneself and putting right past mistakes.

There is a time machine but we don't see it until the end. Thankfully. Which means the film doesn’t take too big a leap into the unbelievable. Kenneth stretches out his hand for Darius to join him aboard, asking her to decide whether he’s a genius or simply completely nuts... He may be both.

Finally kudos to Mark Duplass, who not only starred but co-produced and supplied the song to accompany the closing credits. A busy guy.

Afterwards we head to the Peacock where I’m deflected from the OP by some Caledonian Stout, which is pure Tarmac. It’s good but not good enough, so I’m back on the OP for the next one.