The Quest For Fitness

Saturday morning is again curtailed by the quest for fitness. Well, L's quest for fitness. She has another date with Park Run, whose eye wateringly early (for a Saturday) 9am start we almost miss. They don’t seem to be hanging on for the stragglers anymore.

At the match, which Derby win easily despite conceding a needless red card and a penalty against an in-form but totally dreadful (at least today) Peterborough, I meet L in Derby.

Tonight we take in the first touring production of Sebastian Faulks’ famous novel Birdsong. We do so at the Derby Theatre (nee Playhouse), preferring to support this more intimate venue in preference to the rather stuffy Theatre Royal in Nottingham.

We warm up with a couple of decent ales, all dark, in the Silk Mill after we find the Royal Standard to be standing room only and all the tables empty but reserved. Why do pubs do that?

Then we head to the theatre where they say they sell local Derby Brewery ales, which they do but sadly only in bottles.

Now I rated Birdsong as a book but not nearly as highly as you’re supposed to. The war parts were excellent and harrowing but the romance part just petered out and the modern day section was largely pointless.

Faced with condensing all this into a workable play, which is obviously no easy task, The Original Theatre Company clearly agreed about the modern day stuff and dropped it.

They then interwove the two remaining threads of the Great War and Frenchwoman Isabelle Azaire (Sarah Jayne Dunn) rampant adultery with that nice Stephen Wraysford (Jonathan Smith) . These liaisons are shown in flashback and although this works to a point, it may only do if you know the story. If you do not then the penny may not have dropped until about an hour in. 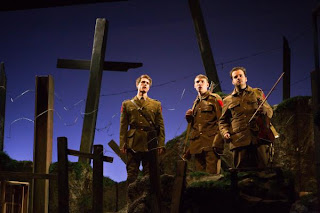 I would now like to see the play done as the book, chronologically, as a means of comparison.

Tonight it is the horrors of the war that provide all of the big moments, centring around the Battle of the Somme and the sprawling tunnels that litter the battlefield. Rightly so but Birdsong is about more than just the battlefield and this is where the play falls down. As he wades through the trenches Stephen still thinks of Isabelle although he is probably trying to forget the ballet dance of the scarves which I think was supposed to indicate unbridled passion... I don't believe Clémence Poésy used many scarves in the BBC adaptation but I will have to check. (Note to self - order DVD).

Then there’s Arthur Bostrom, whose role in 'Allo, Allo' the audience have clearly not forgotten. Not that he lets them, employing the same dodgy French accent in his role as Berard.

In all, a good effort but not quite what I was hoping for.

We have a quick but unspectacular drink in the Noah’s Ark before catching the bus. It was the nearest pub to the bus station that didn’t appear to have karaoke on, although it did have a singer.
(Saturday 20th April)
Posted by FitForNothing at Saturday, April 20, 2013