I have finished Reginald Hill’s The Woodcutter book, which was pretty good and based in some of our favourite parts of Cumbria, which was a plus. L loved it too, although I’m struggling to understand why she didn’t make the sign of the cross at it, as a lot of it is about money.

Seems she has the hots for the principal character Wilfred, better known as Wolf. I hope it’s because she saw something of me in his character. He's a bit the worse for wear - weathered and with a limp, he lives with his collie in his rustic little Lakeland cottage. I tick all those boxes, even the Lakeland cottage.

Sadly this was Hill's last book in 2010 before he died last year.

We’re also finished the DVDs of Pillars of the Earth. Which L has sat through, mostly with her head in the hands muttering ‘why why why’ as they butchered the novel she so loved. I suppose it’s not unusual for the scriptwriters not to bother reading the book they're scripting but as Ken Follett had a hand in this one himself, you would have expected better. 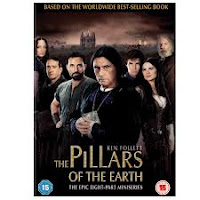 It’s not put her off another of his books though; just don’t watch the TV version.

I have a committee meeting tonight, so no dog training. Which the dogs don’t seem to mind because I take them on the park first. Though Doggo apparently rebels after I've gone and when I get back, it's a surprise that L hasn't carried out her threat to tie him to a lamppost in the street.