L has been having such internet problems at work and it’s been as frustrating for me as for her. I’ve offered several times to drop in and have a look. I'm cheap and work for sexual favours only. So tonight, on my way to the Rescue Rooms, I do so.

Whoever set up their internet up has combined WiFi with using the power circuit to carry the signal. Both are acceptable but I’m not sure why you’d use both at the same time? I make a few adjustments to the setup of L’s PC. We’ll see how it goes.

The dogs have come down with me for a ride in the car, so now L walks them home while I head off to a gig.

As a new trend British Sea Power are playing support to their support band and come on a mere twenty minutes after doors open for a short five track set. The Rescue Rooms is already rammed so everyone has clearly got to know about this. 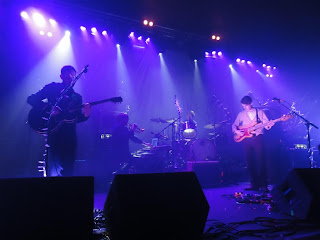 It’s billed as a ‘mellow’ set and on that score it delivers. Three of the five tracks come from their mellower sounding new album ‘Machineries of Joy’. After two albums where they’ve headed further and further into full-on rock territory they have now returned to something closer to what some would say is the ‘classic’ British Sea Power sound.

These three new songs have for accompaniment a couple of not always played classics in ‘True Adventures’ and ‘Blackout’. So far, so good, so mellow. 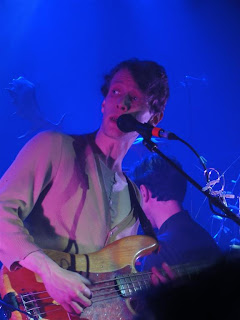 I guess it's also a way to pack a venue out for the support band. So can the Brown Brogues from Wigan live up to the pressure of a full venue and deliver? They also have at best fifteen minutes to set their gear up. Luckily there are just two of them, a guitarist and a drummer, who has handily a slimmed down drum kit. Yay it’s the White Stripes, well not quite. They are soon setup, facing each other, and ready to go in ten.

Then with no messing and no fanfare they are straight into it. The guitarist has a rather unsettling dance routine and two microphones, which is just greedy, one of which is a reverb thing.
Their sound is fast and furious garage rock, and in there amongst the distortion are some great tunes. Although they could just be playing a collection of their favourite riffs I suppose and I’m not sure what they’re singing because the vocals are hard to decipher most of the time but there's something there. Something that requires further investigation.

They entertain us with a pretty lively half hour, it’s messy but then some of the best things are. 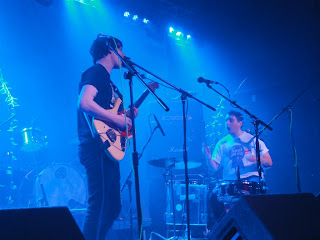 Since the last time British Sea Power played here the venue has had a refit. The bar has been moved to the back of the room and the stairs that once led from the stage up onto the balcony have also gone. This is important if you have guitarist like Noble who likes to do a high wire walkabout mid set. The situation looks insurmountable but I guess we'll see.

The band had turned up for their support slot in their casuals, well it was early. Hamilton was in his cardie and poor Abi was still in her jeans. At least they get their act together and dress up for their return. Abi dons furs and a long skirt. We have already been told to look forward to the appearance of the new BSP bear, provisionally named Bi-Polar, until the fan base can rename it.

BSP have always had a bear. Don't ask. It would take too long to explain. Although now it looks like Abi has hacked a chunk off it.
The title track of the new album ‘Machineries of Joy’ leads us into the ever excellent ‘Lights Out For Darker Skies’ and we’re off rocking. 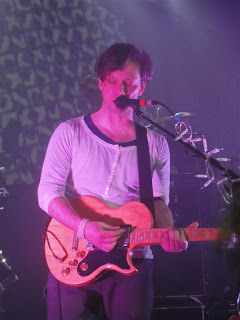 Then they’re slowing it down for a sequence of five quieter numbers which includes two non-album tracks ‘Bear’ and ‘Salty Water’, both outstanding. BSP are never afraid to chuck in something that the masses might not have. The later prompts one of many major personnel shuffles, a bit like a Formula 1 pit stop Yan points out.

Then the set was building momentum again with ‘It Ended On An Oily Stage’, which made it’s first appearance on this tour, almost as if I’d requested it. They are a band who tweak their set often, bringing back and casting aside numbers at will to keep it fresh. It works and it's why this listener comes back. 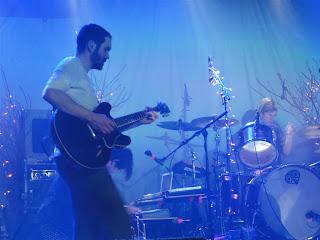 ‘Valhalla Dancehall’, their last album, is sadly neglected this evening and, with the emphasis currently on a lighter sound, the only track we get is a belting 'Mongk II’ blending well with the following newbie 'Loving Animals'.

The momentum continues all the way through to end where they ease off the pace slightly to finish with the not often played ‘Lately’ from their debut album. Which it was terrific to hear again. 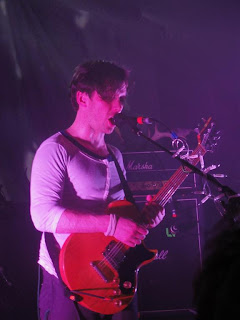 The previously almost statuesque but appreciative audience suddenly came to life for the encore, ‘Remember Me’ and ‘Carrion’ getting a lot of the crowd moving.

So a very good night, as ever, but where was the bear? They say later that they couldn’t convince him to get up on stage tonight. Is that the truth or has Abi murdered him for that fur top?

Oh and Noble kept his feet firmly on the ground all evening. So actually a bit of a quiet night by BSP standards.

Posted by FitForNothing at Wednesday, April 10, 2013