Déjà vu. I get ready in all my cycling gear and then just like last week, it starts to snow. So I abort the idea and before you know it we are bathed again in glorious sunshine.

Not to worry, I was in two minds anyway and it’s still jolly cold, although that is apparently not going to change all week. Still I will have to bike tomorrow.

L says I should do the gym more instead. I already feel I spend too much time in there. Each time I go, I like it a bit less. A bit like L and cycling. She prefers the gym because she doesn't feel that it’s a near death experience each time she goes and doesn't feel she's going to be steamrollered by a bus when she’s there.

Exactly. That’s why I find the gym a bit dull. The threat of being steamrollered by a bus is part of what makes cycling interesting. Without such excitement it would be just like being on a gym bike, only with a better seat.

At least this time the snow has settled on the ground but it's not quite this bad. 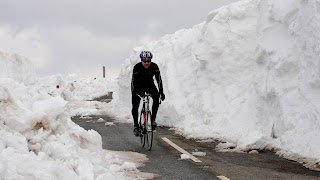 That was Holme Moss in the Pennines last week. The road looks passable, just. The photo, I guess, was taken just before the guy disappeared over the edge. There are no life threatening buses in sight though.

Doggo is not happy that the snow is back (again). His paws just clog up with the snow and all the stones from the paths which seem to stick to it. MD doesn’t seem notice. 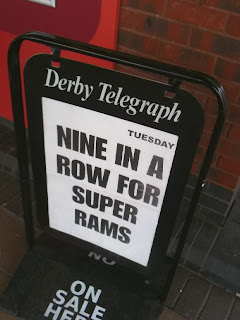