The Curse Of Friday The 13th

Late again. After such an awful drive in yesterday it’s got to be the bike today. It’s cold but I’ve got my new Christmas Pressie Booties, I mean overshoes, which keep my feeties very warm.

Today though, it doesn’t take fifteen minutes less by bike. Despite making sure I leave well early, I’m late again due to getting yet another puncture. No idea why. Well it is Friday the 13th but I didn’t know bad luck was supposed to last all week.

L works the morning and then goes home to await the gasman. Where she says its freezing but she daren’t put the heating on in case it burns the his fingers. I sympathise from my comfy seat in the pub over a lunch of steak pie and beer. I recommend a strategy of one collie across her feet and the other one on her lap.

Then we hear he’s gone off sick and isn’t coming. I get the feeling this doesn’t go down well at home. Instead he’ll be round at 8am in the morning to ruin our Saturday morning.

I bike home and carry my lock with me. I threaten the bike that if it gives me any trouble I'm locking it up and hopping on a bus. It behaves.

The now (almost) traditional Friday night in, where I cook and we watch the Top Of The Pops reruns. Which thankfully we only have one to watch, so we end up viewing the Millennium Trilogy that I’ve just purchases on DVD. It’s in six parts and part one, which we watch tonight, is the first half of ‘The Girl With The Dragon Tattoo’. The whole series adds a total of two hours to the film versions and already it is more like the books and makes infinitely more sense. 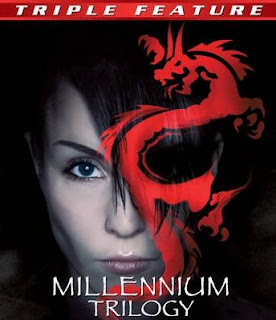