The first thing to note today is that hot on the heels of three wins out of three over Christmas, a very very rare feat around these parts, Derby also win a cup game. It’s only 1-0 against a Crystal Palace reserve side with Dougie Freeman understandably resting his entire first team ahead of a League Cup Semi-Final on Tuesday but, as they say, we’re in the bag for the next round.

It was also mind-numbingly dull as Derby hung on to a ninth minute lead courtesy of a Theo Robinson goal. The highlight, apart from the scrappy goal, is the DJ playing ‘Mrs Robinson’ in his honour. They must have got that teed up ready in the hope of Theo bagging one. A rare spot of humour in what was a humourless game, that only 10,000 turned up to watch.

Totally the clubs fault though and nothing to do with the FA Cup allegedly losing its appeal. It was only £12 a ticket and no offence meant to Crystal Palace but if the club had asked Season Ticket holders to pay £12 to watch the league match again Crystal Palace they’d have got the same gate. It should have been a freebie, bring back those cup vouchers we used to have.

That is once I got over the rather unexpected opening credits which involved Led Zeppelin's ‘Immigrant Song’ remade, sorry re-adapted, by Trent Reznor and Atticus Ross with vocals by Karen O. Together with rather striking visuals. It was totally out of place and was more like a supporting feature. It was how you’d expect a James Bond film to open and then low and behold on walked Bond himself, Daniel Craig.

I won't go over all the plot again because you should know it and if you don't, either go read the book, see the Swedish original or if you’re American and you can’t read subtitles, then read my review of it. This review could only ever have been a comparison between the two. 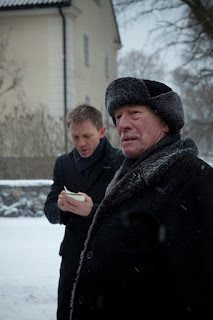 Just like the Swedish original the first hour felt rushed with too much to fit in. You urged it to slow down and eventually it did. At which point it dawned in me that this version was actually more faithful to the novel and included plenty of scenes that were omitted from the original. Blomkvist's daughter is back as is his affair with Erika Berger but not his one with Cecilia but it’s also clear that Fincher has seen the Swedish version because he steals plot from that as well, using the same shortcuts in places. 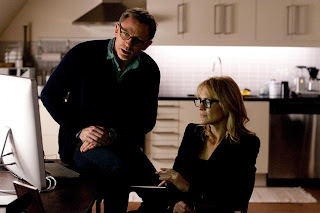 Of course, the Swedish version was spliced from a TV series which, across the trilogy, left a total of two hours on the cutting room floor. I've just ordered the DVD of that, so that'll be an interesting watch to see what was cut for the cinema release. However, they still cut it, so they have to take the rap for it.

This version also seems to big up Lisbeth Salander (Rooney Mara) role and reduce Mikael Blomkvist’s (Daniel Craig) which considering we have a rather wooden Mr Craig here, is perhaps no bad thing. Craig’s Blomkvist lacks emotion and personality, at times looks lost and forgets to wear enough clothes for the Swedish winter. Although, to be fair, Blomkvist is a bit dull in the book as well, save for his liking of trysts with his women. Don't we all. 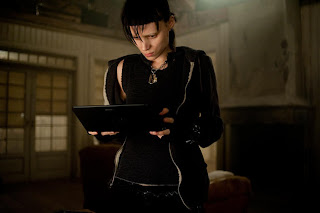 Talking of trysts, this version seems to throw Blomkvist and Salander together on the screen a lot more, both in bed and out of it, but still the pair badly lacked chemistry. Not that a lack of chemistry has ever got in the way of a good shag. Mara certainly throws herself, totally naked, into that and into the whole role. She is good throughout although she will inevitably forever be overshadowed by Noomi Rapace from the Swedish version. She just doesn't have the same presence. Mara’s Salander is waiflike, more pouting teenager where as Rapace was simply a menacing woman who had never learnt how to pout. Loved the t-shirt though Mara, ‘F*ck you you f*cking f*ck’.

If it’s raunchier, it’s also funnier, not sure if that's a plus or not. It’s also possibly more sadistic. Whether this is because Yorick van Wageningen who plays Nils Bjurman looks like Rory McGrath, which is a scary enough thought on its own. 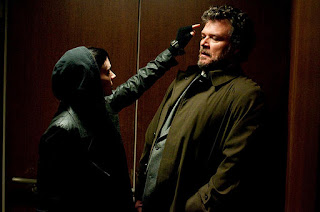 The slightly altered ending may actually be better but isn't correct. Sadly Harriet no longer runs a cattle ranch in Australia but the reinstatement of Salander’s gift to Blomkvist is welcome and is necessary to set up her antagonism toward him later, should the second book get filmed. Although I’m sure some scenes from the second book appeared here - e.g. Salander's confrontation with Bjurman about his tattoo removal. 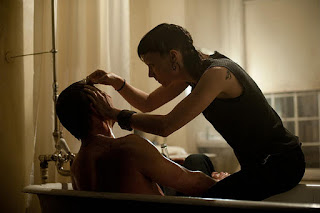 As remakes go, this is actually a good one. The scriptwriter deserves praise and the cinematography is better, although I expect done on a much larger budget. They also resisted the temptation to transpose this story to America, which was a relief.

I would almost say it was better than the Swedish version but for Daniel Craig. So overall it’s still the rawer original for me, I think... maybe... I'm actually not sure.