The Logical Place To Start Looking

Today the oddly named ‘Not The Roman IX’. The name came from the original sponsors back in 1968, Roman Motors, and when the race was over nine miles. Eight years ago the host venue was changed to the Sports and Social Club of NFU Mutual in Tiddington, which is just outside Stratford upon Avon. The change to the start and finish meant a new distance of 12k. So at least we’re both guaranteed a PB as neither of us have done a 12k before. It’s also going to be a frosty one, its -3 when we leave home. Time for long sleeves I think.

The race organisation was pretty faultless, they was also chip timing and a nice cotton t-shirt at the end. I, for one, am getting a bit sick of technical ones. I have to go for a run four times a day now just to use all the ones I have acquired.

The start was a km down the road which made for a nice little workout for my father who had come to support. Route wise, it was hardly exciting but that’s fine by me. They said there was one climb just before half-way, although I’m sure the road started going upwards at about 3.5k. Then it was downhill into the only civilisation on route, the village of Loxley. It was quite a steep downhill section which they had thoughtfully gritted. Around there was the first of two water stations, not that I partook at either.

There was a final short kick upwards near the end followed by a slightly downhill run over the last km to the finish. Out of just over 600 entrants, I come in 148th or something like that. My time is nothing special but is at the right pace to break my Half Marathon PB, should I be able to maintain it for 13 miles. Which is my project at the moment.

When we drop my father off, my mother offers us Sunday lunch. Which is great and very welcome. Unfortunately this stuffs up our plans of a film and meal at Broadway this evening on the grounds (a) we’re now running late and (b) we’re stuffed, but all in a nice way and you can’t have everything.

Instead we head to the South Side of Nottingham, continuing the quest perhaps for the Midnight Owl. The Canalhouse would have been a good place to start, if it wasn’t shut. So we head to the Vat & Fiddle, which being effectively the brewery tap you would have thought might have been the logical place to start looking. We certainly could have saved ourselves some shoe leather because there it was on the bar. 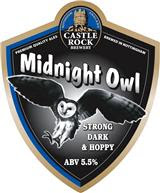 A very pleasant night ensues and it’s just one of several decent ales on the bar tonight. We ought to come here more than once every couple of years.