A nice lie in, then a park session with the little balls to save Doggo having a limp for the rest of the weekend followed by a doze in front of the radio as Derby bore draw 0-0 with Burnley.

‘War Horse’ is a children's book by Michael Morpurgo that I wasn’t really aware of until recently. I’m assured it’s a cracking book and that there’s also a rather good stage production of it using life-sized horse puppets. That’s perhaps where it should have stayed.

It appears to be a fanciful tale that perhaps works in those formats, perhaps a cartoon would have worked also but here, where Steven Spielberg tries to tell it as a real story on film, it fails spectacularly.

Yeah it’s got great, well actually overdone, cinematography, loads of dramatic music and an able cast. Sadly they are all asked to play clichéd stereotypes and to work with a script that asks you to suspend belief at the cinema door. Welcome to the equine offspring of a one night stand between ‘Lassie Come Home’ and ‘Saving Private Ryan’.

Now I've never trained a horse, but I've trained dogs and simply whispering in their ears what you want them to do doesn’t work. I'll go out on a limb here and suggest that it doesn't work with horses either but I suppose I could be wrong.

Then the way the bone hard rock strewn field suddenly becomes ploughable to a foot depth after five minutes of rain was hilarious, almost as hilarious as the plough itself splitting a large rock in two. Again I’m no expert but surely it would be basic farming practice to remove as many of the rocks as possible before you attempt to plough the field? Therefore not making it as hard as possible for your horse, even if that horse does happen to be Joey the wonder horse? The story doesn’t get any less ridiculous from there onwards, very little of it made any sense at all. 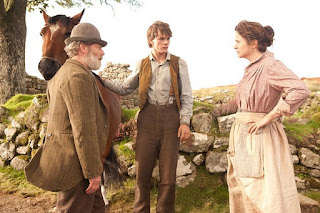 Sorry I’m skipping the actual plot here. Farmer Narracott (Peter Mullan), a Boer war veteran (he doesn’t talk about it), buys a thoroughbred horse at a Devon cattle market rather than the usual type of nag you’d use to plough a field with and he uses the family’s rent money to do so. Oops. Commonsense bypass. His missus, Emily Watson, with her brow permanently furrowed (unlike their field) isn’t happy. Cue yet more furrowing of brow. No matter, their teenage son Albert (Jeremy Irvine), occasionally called Albie, trains him, hence the whispering. He names our hero Joey.

Well the field gets ploughed and the crops get sown but then they all destroyed by another freak storm, not unlike the one that got the field ploughed in the first place. Joey gets sold to a captain in the British cavalry (Tom Hiddleston) for use in a suicidal WWI military manoeuvre, so that the rent can be paid. 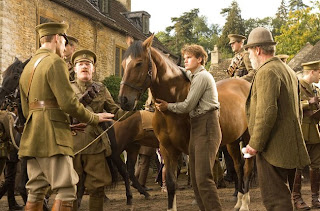 Once the cavalry have all been slaughtered, Joey ends up in the hands of the Germans where he is cared for by two young brothers, one of whom is only 14 but then presumably after having lied about his age to get in the German army, the pair of them inexplicably decide to desert using the horses to escape. They are captured and shot. Good riddance. 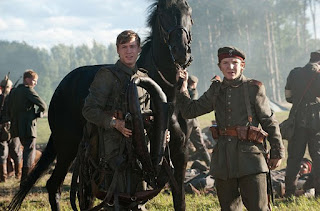 Joey and another horse are now in the hands of a sickly young French girl called Emilie. We only know she’s French because she calls her grandfather ‘grand père’ in a terrible French accent. Joey is only briefly in these pseudo-French hands because soon a group of soldiers with equally bad German accents snatch the horses back. A bit of real foreign language dialogue here would have added a much needed touch of reality and clarity to the proceedings because it’s anybody’s guess what language the ensuing German-French conversation takes place in. 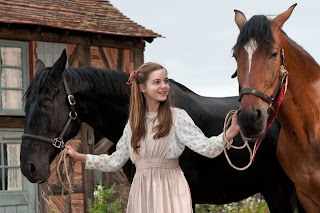 Now Joey the wonder horse visits the Somme circa 1918, where he escapes from the retreating Germans and goes for a gallop across no man’s land, running straight through at least two barbed wire fences... er, no, terribly unlikely. Finally entangled in the wire we get the one great scene of the film as a British and German soldier team up to cut him free from the barbed wire.

Back in the hands of the Brits, Joey is about to be shot because he’s too damaged to save when Albert, himself now fighting and subsequently wounded in the war, recognises his beloved Joey. Quickly the armistice is declared, yet Albert and Joey, suddenly in perfect health again, are set to be parted once more because all the horses are to be auctioned off.

Grand père turns up out of the blue and outbids everyone for the horse, wanting Joey in memory of his granddaughter who has since died. Blimey, ten minutes ago she looked as strong as, well, a horse. Still, it’s a relief of sorts because my partner suspected that she'd resurface later as romantic interest for our Albie. Phew. 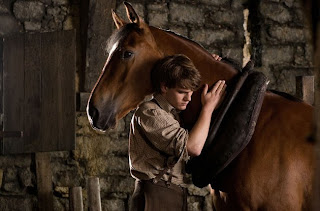 I don’t feel guilty spoiling the plot and saying that it all turns out ok in the end because you’d know that from the off. It’s all so inevitable. The more interesting back story was whether Albert's father’s Boer war pennant, which accompanied Joey the whole time, would make it home safely. Thankfully it did.

In the book Joey actually narrates the story (it probably worked better that way around) and it would have been nice for the horse to have said something like ‘That’s All Folks’ at the end to complete the charade but sadly it didn't.

It is, I think, supposed to be a tear jerker and my partner may have shed a few at some point but then she cries in most things and it’s hard not to cry for the horse for putting up with the corny script. Surprisingly the usually able Richard Curtis worked on it. He does reuse what he can from ‘Black Adder Goes Forth’ but even that doesn’t save the film.

I was originally going to say it’s an ok but not great film but the more I think about it, the more terrible it seems. Frankly it was awful, apart from the horse that is, who to be fair, was great, nay, terrific and acts everyone else off the screen. Give that stallion an Oscar and send the rest of them back to the trenches.