The Sound Of Silence

Back over towards Shropshire today, for the second time within a month for the Blymhill 10k. It’s at a civilised time of 11am but it’s also a cross country, so I opt out. I’ll leave it to the girl who’s chasing the mileage. L bought some Kanadia trail shoes, just like mine, especially. The only difference is that they’re a rather ‘pretty’ pink, mine aren’t. Still, it seems a shame to get them dirty. She should stick to boring colours for her running shoes.

Blymhill is raising funds for their new village hall, which now looks pretty much complete. Registration is in it. Does this mean there won't be a race next year?

They march the runners down to their fate, and the start, somewhere in the middle of a farmer’s field. The boys and I go along to bark encouragement. They did say on the info that the event wasn't suitable for dogs but it turns out to be one of the most dog friendly events there is. There was some great walking down public footpaths both at the start and at the finish. 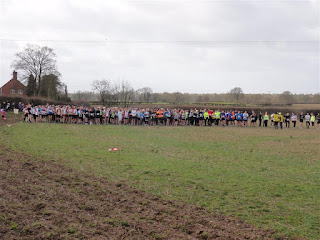 Apparently some of the km markers were a bit comedic and everyone thought they’d done a PB for the first 5k but the organisers were just having a laugh and spaced the markers further apart for the second half of the run.

After battling through the wind, over a few stiles, through some woodland and probably a bit of mud they are all handed a fluffy blue buff for their troubles. Wind, stiles, woodland, mud... would I have liked it? Probably not. Still, there are nice cakes at the finish for which you didn't have to do the run to partake in.

Tonight, in the age of 3D and CGI, we watch Golden Globe winner 'The Artist' which is a silent film, made in black and white and not even widescreen. Ho hum. I must be feeling rebellious.

Hollywood 1927, George Valentin (Jean Dujardin) is a silent movie star of huge proportions. After another successful premiere, a pretty young fan throws herself at him (1920's style) and he poses for photos with her. The young girl is Peppy Miller (Bérénice Bejo), who starts to audition for the movies herself and gets a role as an extra. George is even more impressed when he meets her legs. It's lust at first sight (1920's style).

Times are a changing though, movies with words are on the way... 'talkies' they call them. George scoffs at the mere thought but audiences want change he's told. It's time to move on but filled with a sense of his own importance and perhaps a little fear, he doesn't. Meaning his fall from grace is almost as swift as the rise of the new star and the pin-up of the 'talkies'. Some chick called Peppy Miller. Ouch. 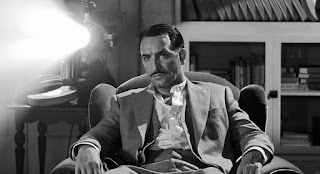 George stumbles on, from one crisis to another. His self-funded film, silent of course, flops. The stock market crashes, leaving him destitute. His wife leaves him and he is forced to fire his loyal butler Clifton. Then when he runs out of alcohol in which to drown his sorrows he auctions off everything he owns. When that fails to solve his problems he sets fire to his old film reels and, with them, his apartment. This leads me nicely on to the star of the film, who rushes to his aid, Uggie the dog. 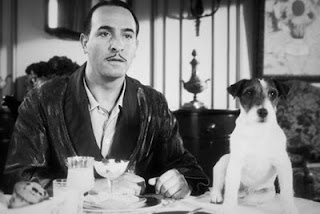 Meanwhile bizarrely, frighteningly, Peppy Miller not content with backwardly slagging George off in public, has started to stalk him. Maybe she's just taking pity on him, but come on she bought ALL his possessions. Obsessive or what. She even takes on his discarded butler. She’s one scary woman, steer clear, but he doesn't and he convalesces from his fire damage at her house where he finds out the extent of her obsessive behaviour/kindness. He puts a gun in his mouth in an attempt to kill himself. For God's sake man, think of the dog, the one that is anxiously pulling at your trouser leg. 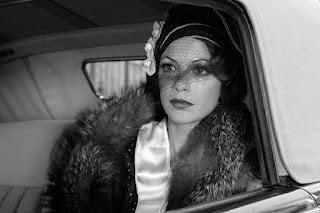 This isn’t actually a bad plot when you write it all down but it’s all old school silent, complete with the overblown gestures and storyboards of the day. Oh, apart from a brief dream sequence where we had sound, which teased you into thinking the plot would develop in that direction. It was certainly odd for the film to continue completely silent with Miller now acting in ‘talkies’ but not being able to hear her.

Its hard work, the lack of dialogue just keeps you focused on trying to lip read what everyone is saying. This is perhaps why I’ve never made it through a silent film before and why everyone unanimously thought ‘talkies’ were such a big step forward. The chap next to us clearly agreed, he went to the loo or the bar at least three times.

At the end Valentin is back in the spotlight tap dancing, partnering Peppy Miller. So is the message of the film that unless you adapt to the times you become obsolete... and to make their point they make a silent film about the end of silent films, in black and white and not even widescreen. Ho hum. Now who's obsolete? Confused? I am.

Ok... it's not a bad film... it’s a well crafted period piece with some excellent attention to detail... but you still walk out thinking that there was a valid reason why silent movies disappeared. Well I did. However, I am clearly in the minority. There appears to a Best Picture Oscar waiting for ‘The Artist’. Which I think will be a bit of a kick in the teeth for the actors and actresses who have put in great performances this year, that is if they get beaten by two people who do not speak.

Well at least everyones favourite character has already had his recognition. In Cannes last year, Uggie was awarded the 2011 Palm Dog award for Best Canine Performance in a film. Bless.

I need a drink after that. We head to The King William IV in darkest Sneinton and then the Newshouse on Canal Street.

Posted by FitForNothing at Sunday, January 22, 2012