We then have an hour or so’s drive back down the M6 to Catforth, which is a village close to the M55, not far from Preston. The race we have entered is called the Central Lancashire New Year Half Marathon and is one of many races organised by Fylde Coast Running. L did their Blackpool to Fleetwood race in October.

The weather is bleak to say the least but does appear to be improving by the minute. Although it is not improving anywhere near quickly enough to save the parking field. We are the third car to be ushered on to the paddy field that has been designated for parking but the first to refuse to budge off the gravel at the entry gate as we watch the first two cars going nowhere fast and wheel spinning themselves deeper into the mud. I reverse out of the field and a marshal quickly deduces that we wish to park elsewhere.

The race itself was right up my street, duller than ditchwater, I loved it. Fairly flat throughout on country lanes but with a long drag uphill from 3.5 to 5 miles and with no noticeable compensatory downhill to follow. To liven things up we had a strong head wind at times and a bit of hail, which is all part of the fun. The scenery was augmented with four trips across the M55, over bridges that is, we didn’t have to dash across between juggernauts. Counting is not my strong point though and I’m sure we did it five times but I may have been mistaken or delirious with exhaustion by then. At least I hope I was mistaken or else I ran extra. 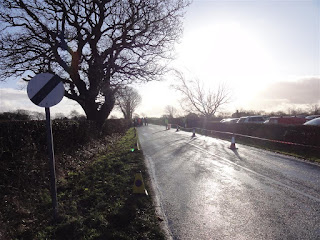 Then there was a nice canal crossing over a humpback bridge to finish, which was the prettiest, or rather the only pretty bit.

I made a slow start, 7:58 for the first mile but then as I worked out that this would get me a 1:44:00 time overall I decided I was happy with that. Then I was unsure if my 7:19 second mile was good news or not. It all went very well considering I’d barely trained for it and I felt so strong that I ran a final 7:15 mile to finish, coming in at 1:43:00 exactly. Pleased with that.

As I crossed the line I was handed a medal (ugh, but a nice one), a kitkat (yum) and bottle of water. The organisation was good, two water stations both with bottled water (brownie points earned), it was well marshalled by some rather cold looking folk and they made good use of the village hall where there were plenty of refreshments on offer. An enjoyable event.

I didn't think the bleakness and the dullness would suit L but it seemed to, she said she enjoyed it too.

We get home to find that Daughter has already headed off back to Sheffield. It was disappointing to have missed her but good in that we thought we were the ones taking her back. So we’ve been saved a trip, which after already around four hours on the road today is no bad thing.

L describes the weekend as an interesting New Year’s break, as she tries to get some life out of her mobile phone which seems to have shipped some water over the weekend. I think perhaps she enjoyed it.