I get the bus. It’s sort of too cold to cycle... and I’m sort of too bruised to run... and we’re due in Sheffield tonight. Excuses excuses.

We’d entered a new local race, well a resurrected one from years gone by. The Loughborough Half. The bad news is, we’re not in because it’s full. We’ve been placed on a waiting list and encouraged to bid for a free place that been placed on ebay. Hmmm.

I think sending a postal entry was our downfall, we need to stick to online entries for these big races. Not that we thought this was a 'big' race. In fact I suspect it’s a very small one but as they still haven’t divulged the race limit we don’t actually know.

In the evening we head up to the M1. L is taking Daughter swimming at the hugely impressive 50m Olympic sized pool there at Ponds Forge. 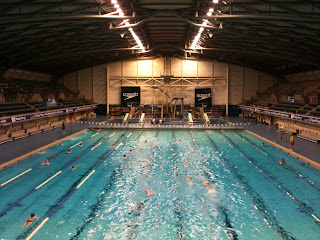 I’m not tempted. I recall how bloody far it was from land to land last time I swam there, which was the only time actually and anyway I’ve got the dogs to look after. We couldn’t really leave them at home after being at work all day. Maybe next time.

So we pub crawl Sheffield, the dogs and I, with the electronic version of the Good Beer Guide in one hand and the furry twosome in the other. All without actually going in any pubs. I’m just casing the joint because L and I fancy a night out in Sheffield some time.

We’re already got our eye on the 'Sheffield Tap' by the station but the boys and I head more into the centre and find some interesting venues. ‘Henrys’ isn’t very promisingly named but looks ok. The ‘Devonshire Cat’ looks even better and the ‘Old House’ better still. Sort of a bit like our 'Ropewalk' here in Nottingham. The ‘Old House’ is on trendy Division Street which is where you’ll also find 'Bungalows and Bears', which L’s been in and, although not in the Beer Guide, probably needs to be tried. Also on Division Street is the once legendary Frog & Parrot...

The Frog & Parrot has its own brewhouse, although this is currently mothballed. The place used to be run by a chap called Roger and was a Whitbread house that had free reign to brew their own beers. Which they did with abandon and sold nothing else, which was quite a thing in the 1980’s and 90’s, thus gaining the place quite a cult status.

Its main notoriety however came from brewing 'Roger and Out', which was at the time the world's strongest beer and was served only in thirds of a pint. You got a certificate for each third, on which the writing got more blurred on each one. 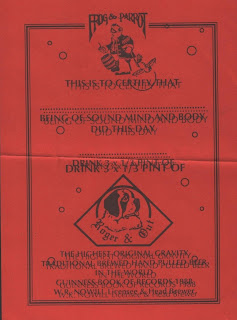 Then having drunk a full pint and acquired all three certificates you were eligible for a t-shirt, at extra cost, and an ambulance home. It was 16.9% ABV when it was certified by the Guinness Book of Records but I believe they toned it down over the years to around 11%.

'Roger and Out' was more a gimmick than a beer (see Brewdog for a modern equivalent) and was pretty much undrinkable. Some of their other beers were excellent though. Reckless at 4.5% was the beer of choice but 'Roger's Conqueror' was also worth a go at 6.7%. I also vaguely recall one called 'Roger's Rocket Fuel' as well. The house beer was called ‘Old Croak’ but that was too weak for me. 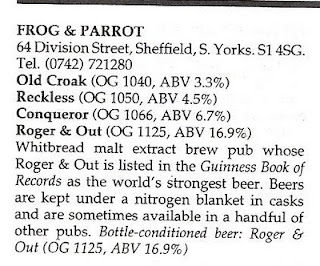 The staff in the pub were often dressed up like the serving wenches from that bar in Black Adder (the women anyway) and he had a real parrot called Toni, which allegedly used to fly around the pub and drink from people’s glasses but it was always confined to barracks in its cage when I was there. The parrot apparently got so stressed by it all, it pecked most of its feathers out, had to be retired and was replaced by a plastic one. I’ve no idea what happened to the frog... 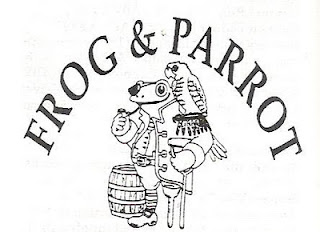 Sadly all this is mere history now and if I mention the two words ‘Greene King’ you’ll probably nod your head in sad recognition of the reason why. The Frog & Parrot now appears to be just another run of the mill Greene King pub and is now outshone by the more promising establishments on the street, so we’ll probably, sadly, give it a wide berth when we come up.

Still it should be a full and fun night, as long as we avoid the students...