Time to test drive some new trainers today. Same brand, different model. The bad news is they don’t seem very comfortable walking into work. This does not bode well.

I run to the bus stop in Chaddesden with the shoes still not feeling at all comfortable. Then I get the bus to Stapleford, getting off opposite the new Wetherspoons pub which is rather confusingly called the ‘Admiral Sir John Borlase Warren’, which is within an Admiral of being the same name as the well established (since about 1814) ‘Sir John Borlase Warren’ at Canning Circus.

Yet I’m sure they were going to call this new pub the ‘Staff and Serpent’ after the medical centre they demolished to make way for it but obviously they’ve changed their minds.

The man himself was born in Stapleford in 1753, became a Member of Parliament (although not in Nottingham), an able seaman and then obviously later an Admiral. So I suppose we have to say well done Wetherspoons. 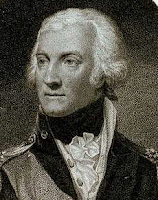 I also didn’t realise that the good Admiral was also commemorated by and appeared on the pub sign for the ‘Happy Man’ in nearby Hickings Lane, which is also no more. He was a ‘Happy Man’ because some lass called Caroline gave him the eye once and he said that if she married him she would make him the happiest man. So presumably she did.

Anyhow, I digress, from here it’s around five miles home, in my uncomfortable shoes which do eventually seem to bed in, either that or my feet have simply gone numb.

Once home, a night in with episode 3 of the Millennium Trilogy or if you prefer part one of film two e.g. ‘The Girl Who Played With Fire’ which has loads of extra scenes, actually makes sense, unlike the film and is really excellent.