I Wasn’t Expecting That

L runs this morning despite the conditions but at least it’s dry, I’ll be running in the rain later. Then she's working from home so that she can deal with the boiler repair man who is coming to fix our boiler, which worked fine until they serviced it a couple of months ago. Predictably he can't fix it and has to come back again; they always have to come back.

L asks what she has to do to get me to take her to see ‘Puss in Boots’ this weekend... We’ll... a cosy night in tonight perhaps... then she’s got to find somewhere showing it in 2D, I'm definitely not seeing it in 3D and at a reasonable time, which is difficult because they rarely show these cartoon things at adult times. She’ll probably also have to take me to see something more intellectually challenging over the weekend., say the new Dragon Tattoo film. Oh and wear that skirt and boots combo that she wore in Derby at Christmas. Simple really.

According to the BBC this morning brain function starts to decline at 45. So we are all doomed. The thing is when does the brain function increase in the first place? Current evidence suggests this is clearly not before you’ve finished Uni...

I do my run, it stays dry and I get a bit carried away running nine miles. All good.

After some complex negotiations on the ‘Puss in Boots’ front we tee-up a night of Top Of The Pops 1977 style.

The 1976 shows have of course been terrible, in almost every respect. There's only so much Demis Roussos and Our Kid (look em up, if you dare) the human body can take. We must have been made of stronger stuff in 1976. It all made Chicago’s ‘If You Leave Me Now’ look almost cutting edge. There was a bit of Bolan of course but even Thin Lizzy looked dull on TOTP.

1977 though should be little better. 1977 heralded a bit of a watershed moment with the arrival of punk/new wave. Not all things will improve though. Although the awful Ruby Flipper were quietly axed after only six months, we now have the almost-but-not-quite-so-awful-but-at-least-they’re-all-girls-and-their-outfits-are-even-skimpier-than-before Legs & Co. Who were introduced via a competition that we didn’t get to see the result of because apparently someone wiped the 11th November show where it was announced. Still, the public clearly wanted a more traditional all female dance troupe again just like Pan's People. e.g. totty for the Dads, and they got it.

Here is the competition winner, with the girls, who are looking remarkably overdressed... 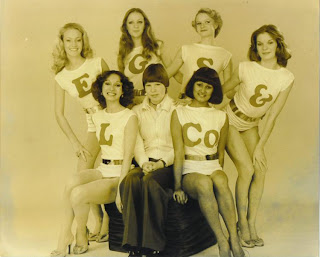 It’s amazing what you can find on the net.