It's even windier this morning than it’s been all week, if that’s possible. Although obviously not as windy as it was in the Lakes. I’m on bus, which is delayed due to the A52 being down to one lane due to flooding. Yes its rained a bit too.

More tales from L at the gym. It appears that not only is Simon Bates alive and well but he's also still doing the Golden Hour, only now it's on Smooth FM. Whatever that is... According to Wiki, it was once Jazz FM, which swallowed Saga Radio and then forgot to play any jazz. Apparently this year they launched a spin off station called Smooth Christmas that played nothing but Christmas music. Which is all you need to know. Sounds ghastly.

Anyway... Simon Bates...Hmmm. Always liked the Golden Hour, always hated him. Apparently now he even gives the date of the Golden Hour away at the start. Another reason to dislike him, that’s hardly in the spirit of things even if people are going to google it.

Squash tonight with a new price tag of £7.10 a game and that’s with my Citycard discount. Happy New Year from the council then. I would actually have no objection to paying £7.10 if the courts were worth that price but they’re not. I’d pay £10 a game if they gave us decent facilities.

I win the first game of the New Year but lose the match 3-1. It was close though, two of those went right to death, losing both by two points.

It’s the FA Cup 3rd Round this weekend, now horrifically sponsored by an American lager. Just like Christmas Eve was once the best night out of the year, the first Saturday after New Year was always the best day in the football calendar. I’m still a big fan of both. 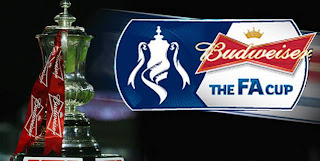 Tie of the round is obviously the big local derby. No not the Manchester derby, City play United twice a year already, so it’s not really a big thing. You could raise a case in the West Midlands for Birmingham v Wolverhampton but that happens pretty frequently too. No the big match of the day is the Fylde derby with Blackpool going to their non-league neighbours Fleetwood Town. How often does that happen?

Fleetwood’s 5,094 capacity Highbury Stadium is obviously completely sold out for the match. The only person in the area not gripped by the prospect of the game appears to be Blackpool chairman Karl Oyston, who says he isn’t attending because he says 'the game is neither exciting nor a high priority'. Clearly the whole thing terrifies him.

'It's a competition that neither club will win' he says, as if that's important. So too was the Premier League Mr Oyston, that thing you had a brief dalliance with last year, I assume you went to some of those games. This sort of match is exactly what football is about.

I imagine he is probably bricking it that his manager will rest key players. Because with Fleetwood flying at the moment, two points off the top of the Conference and with only three defeats in 26 league games this season, any weakening of the Tangerines team would probably make Fleetwood slight favourites. Be afraid Mr Oyston be very afraid.

I love the FA Cup and still will, even when our manager rests his own ‘key’ players, tells the rest to take it easy in case they get injured and we lose at home to Crystal Palace on Saturday. A result which would effectively end our season being as we are a mid-table Championship side with no real prospect of movement in either direction this season. A good cup run would revive our season.