There’s another cross country race on the park for the dogs and I to disrupt this morning and this one seems rather important. It’s the Midland Counties Cross Country Championships. 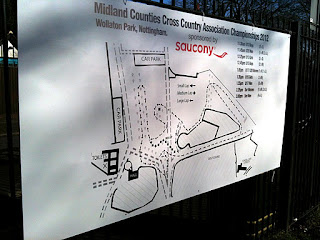 I would have stayed to watch it and disrupt it some more but it’s the FA Cup 4th Round today. A rare treat in these parts, although they’ll be no 5th round treat as Derby lose 2-0 at home to Premier League Stoke City. This is no disgrace of course but I didn’t feel we really gave it a go. Reverting to one up front, after such a good run playing with two strikers, was initially perhaps tactically astute against a Premier League team but then having gone a goal down in only four minutes... not changing the system until fifteen minutes to go seemed rather unambitious to me.

In the evening we partake of the ‘Margaret Thatcher’ film, the ‘Iron Lady’ which is on in the cosy romantic confines of the Paul Smith screen at Broadway. Well it would have been romantic had it not been a total sell out and I suppose not a film about Margaret Thatcher/dementia.

The film opens with an old lady complaining about the price of milk in her local shop. That lady is Margaret Thatcher (Meryl Streep) who has given the security cordon around her flat the slip. Thatcher is now in her mid 80’s and growing physically and mentally frail. This is the focus for the majority of the film, an old lady in her twilight years, wandering around her flat, conversing with her daughter and her few staff, whilst sorting out the belongings of her late husband Dennis who died in 2003. Someone whom she seems to struggling to cope without because Dennis pops up regularly in her imagination, and in the ghostlike form of Jim Broadbent. This is at first confusing and then eventually quite annoying.

Interspersed with these present day scenes are flashbacks of the rest of her life. From growing up as a Greengrocer's Daughter to being inspired by her father and building a career in politics. 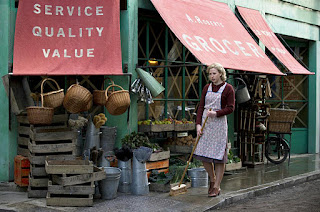 This is the real strength of the film as key events, such as the 1979 Election, the assassination of Airey Neave (Nicholas Farrell), the Brighton bombing, the miners' strike, the Poll Tax and the Falklands War vie for screen time. All of these scenes leave you gagging for more and while there were political omissions, personally I wanted more back story, of her life before politics, at university or while working as a barrister. 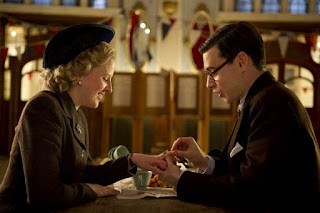 I also wanted to see the fight for the leadership of the party but her story is a vast one and there wouldn’t be enough time in any film for everything. Which makes it just the more annoying that after these too brief scenes we are returned repeatedly and rather frustratingly back to the present day. 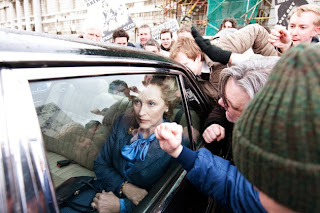 It’s been a commonly expressed opinion, and I totally agree, that the film focuses on the wrong thing. A massive two-thirds of the film is set in the present day, which isn’t terribly interesting and actually makes me feel a bit uncomfortable for being a fly on the wall during somebody else’s declining health. Although it did achieve one thing and that was to humanise a woman who many people thought was anything but. Still, I got to the stage that if I saw Jim Broadbent's ghost one more time I was ready to stand up and punch him. 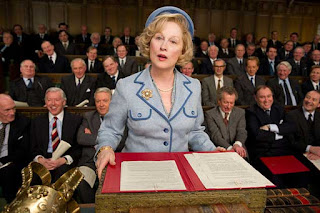 I can’t help feeling that if you want to make a film about an elderly person’s slide into dementia, then make one but you don’t need to focus on a famous figure to do that. Equally, if you going to make a film about Margaret Thatcher's life, make one. One day somebody will make a great one but unfortunately this isn't it. Two great story ideas do not together make one great film. An opportunity missed. 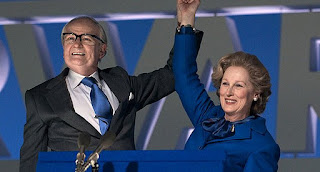 It’s still very enjoyable though, Dennis aside, with some great performances. Michael Pennington is hilarious as Michael Foot but then Michael Foot always was hilarious but Richard E Grant makes an odd Michael Heseltine. Meryl Streep meanwhile is outstanding as MT, but if we’re talking best Actress statuettes... is her Thatcher as good as Michelle Williams' Monroe? Probably not.