It’s been a steady start from Team GB in the Olympics but the natives are restless because we haven’t landed a gold yet. So L and I go down to London to sort things out. Where we find London well decked out for the games. 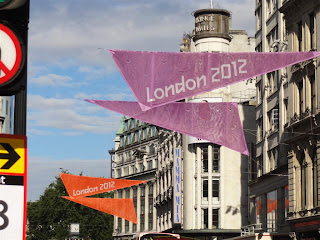 Almost as soon as I arrive in the capital the first gold arrives courtesy of Helen Glover and Heather Stanning in the rowing. We’re off and running.

That’s sort of taken the pressure off Wiggo I suppose. I navigate my way across London to Kingston where I get in position to watch the Individual Time Trial. L has preferred something less cultural and has headed off to the Imperial War Museum.

I’m in position, about 3k from the finish of the women’s and around 10k for the men’s. It’s busy but I have the front row and the biggest flag. All set. 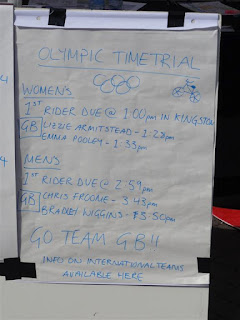 Now it’s raining... but it doesn’t last long. First up the women. 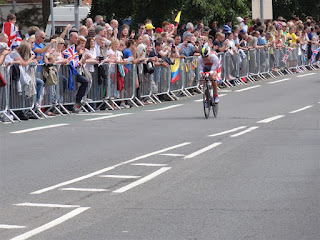 Both Emma Pooley and Lizzie Armitstead put in good rides for 6th and 10th but no medals there. Too flat for Pooley, too individual for Armitstead, in fact she probably has no idea why they entered her in this. Not her discipline at all. 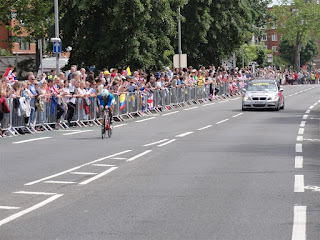 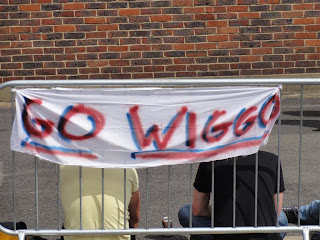 Then deflation as he’s only '2nd' at the first check. Get a grip man. Seems he’s pacing himself and by half way he’s in front and thereafter in a different race to everyone else. Chris Froome is up to third.

Then they blaze past us. First Froome and then Wiggins, a wall of noise for both of them but not just them. The crowd dish out only slightly lower decibels for everyone else. 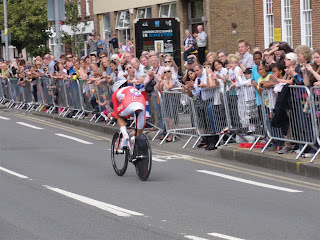 Then it’s time to be glued to the radios for coverage of the finish. Not that it was ever in doubt. 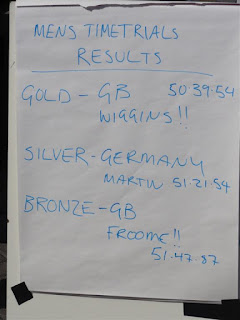 A mere ten days after winning the biggest race on the planet, Bradley Wiggins is an Olympic champion and with Chris Froome third, it’s job done. Gold and Bronze.

Everybody is disappearing inside the local pubs to catch the end of the TV coverage, I join them.

Then I head back to central London to find a girl to wine and dine. L is actually waiting in Waterstones. Where else, even though she’s barred. She’s actually in the bar there, who’s ever heard of Waterstones with a bar.

From there we find we find the Euston Tap, a craft beer house. Good beer but no food. Oh dear, a case of gritting ones teeth and having a sandwich on the train.