A Dose Of The Unusual

Today we’re in the grounds of the 13th century Coombe Abbey. I’m well wrapped up in my waterproof, walking boots and have just been handed a bag of sweets. They look after the supporters around here. L meanwhile is in running gear and stood practically ankle deep in a waterlogged field, probably debating with herself whether to take her coat off or not. Some others have decided on ‘not’.

Previous comments on this race include the words bomb craters, frozen molehills and hurdles only this year you can delete frozen and replace it with wet, very wet. One does like to read the small print before one enters a race. Not that L will be fazed; she likes a dose of the unusual. It also looks like they’re selling bacon butties over there, where would you rather be? 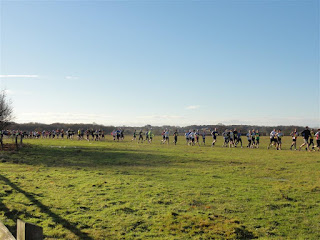 The hurdlers turn out to be just bales of hay, and just the one bale high, so nothing of Survival Of The Fittest proportions. The bomb craters are also apparently not too bad but then there’s the water... there’s plenty of that with the footpaths and bridges flooded to the extent that I would be well over my boots should I have ventured in that direction. So I think I’ll stay put. 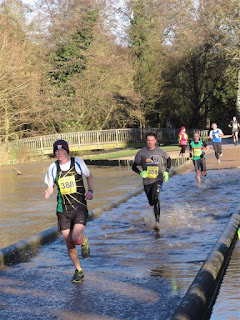 They all seemed to enjoy themselves though and the hot soup they are handed at the end.

Afterwards we head into Leamington for lunch with Son, which is harder than it looks as both the Wetherspoons pubs are heaving. We get a space eventually.

In the evening, we pop into town to the Hand & Heart briefly before I drag L towards the Old Peculiar at the Peacock. Which is very nice although surprisingly L stays on the wine all night.