Cough cough. So, no bike again, I think it’s best to play it safe. I’m certainly not going anywhere near the car though, not with the current traffic problems. Then the bus glides serenely through because there’s no traffic today. Bizarre.

L says that although it's Friday, can we break with tradition ever so slightly? If she can get a DVD cheaply will I watch ‘The Other Boleyn Girl’ with her. She’s needs to do her Tudors research, but more specifically the Boleyns, for her latest read.

She’s asking me to substitute David Soul singing Silver Lady on TOPT 1977 for Natalie Portman? She drives a hard bargain. I’m sure I’ll cope though, Natalie and I go way back.

Although as she plays Anne, she’ll probably get beheaded and I don’t think I’m spoiling the ending too much by revealing that. Unless they’ve written history of course... wouldn’t be the first time. 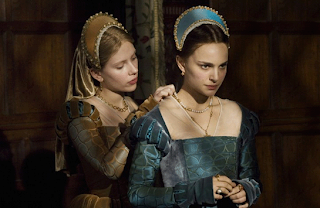 Apparently The Other Boleyn Girl called Mary isn't beheaded. I bet that’s the part played by Scarlet Johanssen. Bloody typical. Anne was also said to be flat chested and unattractive unlike her sister. Natalie really ought to have words with her agent.

L finds it on sale for £3 and comes home with that as well as two skirts and some black tights that I’ve bought for her. I have such good taste. Prodigious use of the joint credit card it seems which is ok, I did offer. All I require as recompense is a fashion show later. 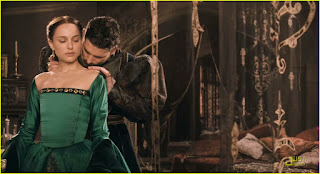