L persuasively talks me out of cycling, with the help of a -3 temperature on the thermometer. I don't really want any more cracked ribs at this stage of my recovery from injury. 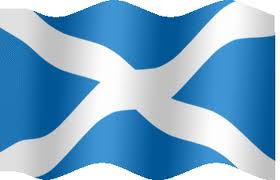 So we ought to do something Scottish tonight, perhaps I’ll get my kilt out and open the whisky or perhaps not. We do actually have a haggis in the fridge, although it was intended as a gift for Son and it’s now also out of date.

We must be able to come up with something else that’s Scottish. L suggests venison but she’s just desperate for a piece of the local deer, who aren't, I don't think, Scottish. Scotch broth? Scotch egg? Scotch pancakes?

In the end L suggests a Celtic Thai Curry which is a good compromise. I cook it using actual Scottish salmon. L herself does ‘Scottish Mist’ for dessert but apologises in advance for having to use Moroccan fruit and West Country cream but she's hopefully that she can add some whisky to it that is actually Scottish. Actually, I think it’s a choice of Jameson or Brandy...

We watch TOTP as usual, although we probably shouldn’t unless the Krankies are on it or the Bay City Rollers I suppose, but I think one of them is under investigation, so they’re probably banned.