Flask Packed, Off To Gig

L heads down to London for work at the crack of dawn. Well 7am, which is actually pre-dawn this time of year. So I walk the boys, in the dark and in the rain. They enjoy it more than I do. Then I leave them bedraggled and still in the dark to go to work.

Then I only just get the bus, a totally full Red Arrow. The girl after me got the last seat, so we almost had to share. It’s getting ridiculously busy on that service. It would be nice if the bus company noticed, got wise to the fact they could actually make even more money and put another bus or two on?

I finish at lunchtime and take the afternoon off to break up the dogs' day because I’ve got a gig in Wolverhampton tonight. As it’s finally stopped raining we do the park, which is mainly one big lake now. This makes ball kicking/throwing rather traumatic.

At least MD got chips, twice, once on the way there and then again on the way back. There’s still some left for his breakfast tomorrow unless some other dog tidies them up first.

Then I make myself a flask to take for after the gig... didn’t used to do that when I was 18.

Thanks to the M6, why is it always the M6? I only catch the last two minutes of the Dakota Beats. So I can’t really comment guys. Except to say, of what I saw, you were noisy, animated and got a good round of applause when you went off, so you may have been quite good.

Then the Virginmarys come on to Jay Z, which is not how to get me on side. It's the second time I've seen them and the first time, about 18 months ago, they didn’t leave much of an impression. This time they do.

They are the best kind of a three piece; just drums, bass and guitar. They open powerfully with ‘Bang Bang Bang’ and don’t really let up.

I like lead singer Ally Dickaty’s raspy vocals, even if he does tell us he’s ‘Out of (my fucking) mind’ before moving seamlessly on to the next number ‘My Little Girl’, which is perhaps not as sweet as the title suggests. I’ll get back to you on the finer lyrical points of that one.

‘Dressed to Kill’ is as close to a ballad as they get and even that's got serious balls. It’s a top tune, which I try to find on the CD’s they’re selling post-gig but I don’t think it’s been released yet.

In terms of pure entertainment you could actually just watch the drummer, Danny Dolan, who is ace and have a great evening. He’s a man with loads of energy and knows how to batter a drumkit, which half the time he’s out of his seat doing.

I recommend you catch them but I would do so smartish if I was you because the way Mr Dickaty sings I’m not sure how long his voice will last. 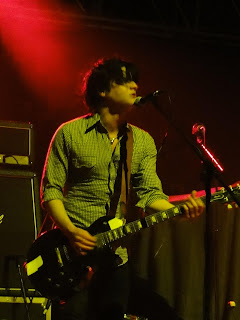 There's a huge gap between the crowd and the stage here at the Civic. Is that really necessary? Stage diving will require a most impressive leap of Olympic proportions. So unless Greg Rutherford is in tonight it ain't gonna happen.

So to Feeder. You may ask if this blog needs another Feeder review? I've seen them so many times it must be getting monotonous and what with me whinging more about what they don't play rather than commenting on what they do play... but they're one of the few bands that I got into from the start and that are still going 15 years on. So it’s personal, we have affinity.

That said, I almost skipped this tour because Wolverhampton is a fair trek on a Wednesday night and there's nowhere closer. It's also a fairly large unintimate venue and having seen them twice earlier this year in smaller venues, could it really be any better? They did say they would chuck in some real oldies on this tour... but then they always says that... then don't... either way, I promise not to whinge tonight.

As they’re setting up the stage, they're taping down around four sheets of paper for lead singer Grant Nicholas. That’s more than just a set list, has he forgotten the words of some of the stuff he intends to play?

Then the lights are down and is that Grant’s dulcet tones I can hear them playing over the PA? Are Feeder going to come on to their own backing track? I know this song... but can’t place it... quick, Shazam it! Ahhh, ‘20th Century Trip’, the last track or ‘outro’ on Polythene, their first album. Nice touch. Hope that’s not the extent of the oldies. 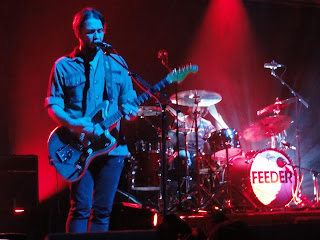 'Oh My' opens the show, it’s the opener to the new album and a great opener, the only question is why it's taken so long for it to get to that spot for the gigs.

'Sentimental' is the selected extra from the ‘Renegades’ album tonight which wouldn't have been my choice but perhaps serves a warning to the crowd that this is going to get heavier.

Previous nights have got either 'Yesterday Went Too Soon' or 'Hey Johnny'. Hell I want both, they are both great tracks. YWTS is a must in any Feeder set for me. A track that still gives me goose bumps every time I hear it live, which obviously isn't often enough. It's a song about not realising what you've got until it's gone. A bit like one’s back catalogue... Damn I promised not to whinge. 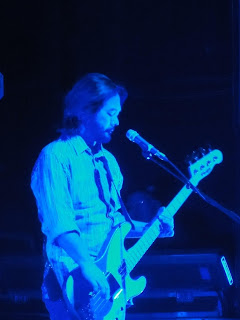 Grant seems undecided about which guitar to pick up next, as if weighing up what song to play. Finally the distinctive intro to YWTS tumbles forth from the stage. Good choice. I’m a happy man already. Then later we get ‘Hey Johnny’ as well, bonus. It’s a special song for anyone who knows their Feeder history.

I'm happy to see 'Tender' appear because it's a change and any change is good. Grant recently played it acoustic at the London Guitar show, where it went down well. Tonight, it’s full band and it sounds pretty ace actually. Another good choice mate. 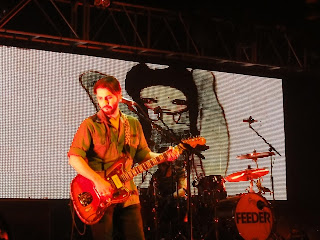 Grant jokes that he’s lost the coin toss yet again about whether to include the next track in the set. This is met with a chorus of cries for ‘Tangerine’.

A track he claims to dislike and has tried to retire for good more than once. Yes it's always ‘Tangerine’ and probably always will be. I don’t understand it either.

You write two of the most ridiculous throwaway pop songs on the planet, one is a success and one isn’t, you grow to hate both of them but both haunt you forever. The band plays the other, more successful one, ‘Buck Rogers’. The crowd go predictably ape. 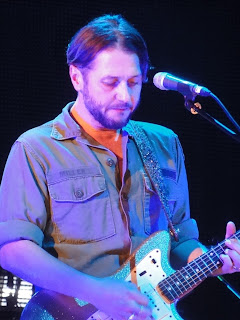 ‘Buck Rogers’ actually brings to the end a sequence of seven consecutive singles played back to back tonight of which only 2010’s ‘Renegades’ didn’t chart. An impressive collection. Then four of the last five tracks showcase the new album ending with the epic title track of ‘Generation Freakshow’.

Encore time. Starting with 'Children of the Sun' with just Grant on guitar and CC on keyboards but then the rest of the band join until it’s full band part way through, as it is on the album, and it sounds better for it. 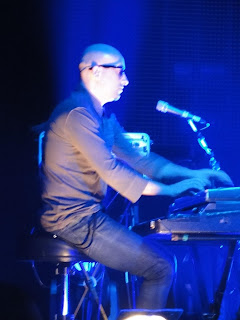 Then something for the ‘old skool’. It’s back to the early ‘Swim’ EP for ‘Sweet 16’ which is simply amazing and this ‘old skool’ reviewer is one very happy bunny. Then without a break straight into ‘Descend’. ‘Descend’ has certainly been toned down a touch, possibly to try and appeal to the newer fans who may find its original format a bit too heavy. Although I still thought it sounded absolutely immense as it echoed around the Civic Hall and probably down the street.

Grant looks a happy bunny too playing this and who wouldn't be, it’s such a colossal tune. Much better than a throwaway pop song eh? I would be more than happy for this ‘new’ version to become a permanent fixture.

Then as it comes to its conclusion and so too the night, the long jump competition starts with ‘Just A Day’ and there’s a lot of entrants. Despite that though, no one makes the stage. Clearly if Mr Rutherford is here, he's on the balcony.

Then its back to ‘20th Century Trip’ to play us out of what has been an awesome night. See what happens when you shake the set list up a bit. More please.

People who know better than me say the band’s manager wants Grant to ‘man up’ and play more of the old classics and is apparently twisting the thumbscrews for a Swim/Polythene/B-sides tour. I like their manager, whoever he is.