Another trip to B&Q, oh the shame.

Then I attempt a plumbing job with some success, well mixed success. I don’t get the new towel rail up and running. Only because I don’t have all the parts and now as its gone 4pm that notorious DIY centre is now closed. I do get the old radiator off though but then when I reconnect the piping as a temporary measure, using a spare piece of pipe I found in the shed, I find that the spare piece was one I’d removed after we had burst pipes and should have been thrown away... luckily, after a minor flood, I find another piece to replace it.

Not for the first time Rock City opens its doors at 7:30 for a sold out gig with the first support on at 7:45. No chance. The queue is down the street, around the corner and disappearing inside the neighbouring multi story. Then of course Jim Lockey & the Solemn Sun finish five minutes early. So I don’t catch a lot of their lively full throttle folky-country-punky-rocky mixed baggy sound all the way from Cheltenham but it was good while it lasted Jim. Sort of like Mumford and Sons on acid. 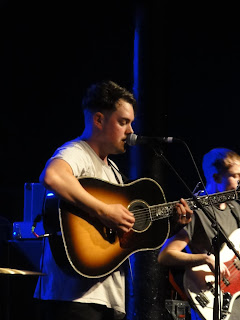 So Tim Barry, a Yank, who doesn’t like coming on to Iron Maiden (they’re playing ‘Run to the Hills’ on the PA) and who might just talk his way through his entire thirty minute slot if he’s not careful. He takes time to tell us the back story of how he met Frank Turner on the US Revival Tour in 2008 and had to take the stage after him. Tonight he's somewhat relieved to be on before him.

He also tells us that that anyone can do what he does; all they have to do is learn the same three chords. This is perhaps why he seems to play the same song all set. It’s a good job it's a good one. He’s also so nice and thankful for his upgrade from his normal bar gigs that the crowd take him to their hearts. His is an entertaining set from a chap who’s clearly as passionate about what he does as the man who’s coming up next. Right you can turn Iron Maiden back on now. 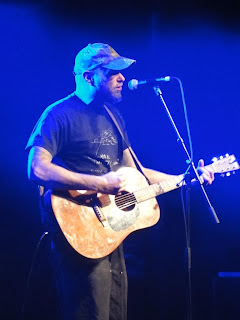 Now it’s Turner Time for, rumour has it, the 1286th time. To his huge credit, no matter how big the man gets, and he’s very big now, he still stays grounded in his venues. He’s as likely to pop up in the 450 capacity Nottingham’s Rescue Rooms, like he did last year, as the 12,000 capacity Wembley Arena as he did in April this year or anything in between for that matter such as Rock City tonight. It’s the first night of his latest UK tour, a sell out of 25 UK venues plus 3 in Ireland and one in Germany all before Christmas. Now that’s a tour. The guy could have just done half a dozen arena shows and be done with it but that’s not his style.

This is his style. We start ‘a capella’, well the crowd does, I can’t actually hear whether Frank is joining in to the opening of ‘If Ever I Stray’ because the crowd are already drowning him out before he's even opened his mouth. 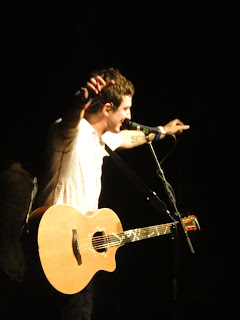 Does the guy ever get sick of everybody singing almost every word back at him, often before he can even get started? Not one bit, well not that he lets on. Audience participation is the big thing here, if you’re not singing you’re not doing it right.

It's nice though when he drops in a few less frequently played numbers such as the excellent ‘Isabel’ which allows Frank to rest back control a bit, with just a few hundred backing singers on that one.

There is also a bit of understandable quiet on the new numbers he plays tonight, ‘Time Machine’, ‘Four Simple Words’ and ‘Wherefore Art Thou, Gene Simmons?’ The latter of which is an interesting ode to the man from Kiss who once claimed of having slept with 4600 women and has the photographs to prove it. It’s a piss-take not a tribute, I think. 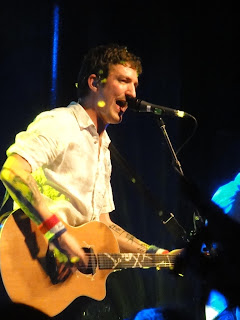 Other highlights? Well where do you start? Pick any from the nice mix of solo acoustic and full band numbers backed by the excellent Sleeping Souls.

My own personal favourite, as ever, is ‘Substitute’ which he dedicates to his moustache. He’s not totally happy about his Movember participation but he’s doing it anyway, as it’s all in a good cause.

Then there’s the popular mostly crowd sung ‘Reasons Not To Be An Idiot’, the brilliant blasphemy of 'Glory Hallelujah', the home town tribute from the ‘Wessex Boy’ himself, ‘The Real Damage’ - the best song about a hangover ever or the hugely sad ‘Long Live The Queen’ which now seems to have metamorphosed into one of his rockiest numbers. Kind of the point I suppose, keep it upbeat. 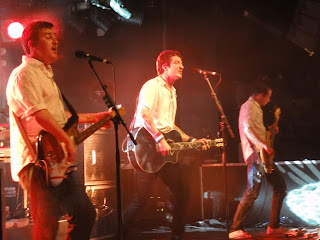 They’re all good and we’re all having a good time. Which is why I suppose he chooses to end tonight’s session of togetherness with ‘I Still Believe’ with its message that everyone can find a song for them, ‘for every time they've lost and every time they've won’. Yep, ‘who'd have thought, that after all, something simple as rock 'n' roll would save us all’. 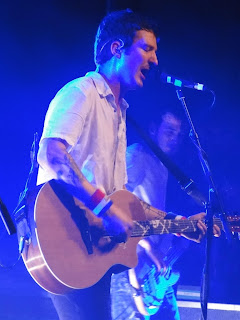 For the encore, there’s the stunning and heavily requested ‘Redemption’ before the usual elongated sing-along to ‘Photosynthesis’ which means then in order to cram in one more he hurtles through ‘Dan's Song’ in about one minute flat, whilst spending most of this riotous finale on his back in the mosh pit.