There's an article on the BBC saying that cycle and walking 'must be norm' for short journeys. I didn't think that would go well but I was particularly amazed by a lot of comments that seemed to think it’s quicker to go places by car. Clearly they don’t live in Nottingham or Derby.

Or Birmingham for that matter, which is where I crawl to after work for another gig.

These dates looked like they may never happen. The ones in Europe had been cancelled because Juliana Hatfield was unable to make them, so Evan Dando did one on his own, which didn't go down that well, so they scrapped the rest.

The UK ones don't seem to be that well organised either. The Institute’s Facebook said this morning that stage times would be up later. They were, at about 7.30pm, half an hour after the doors had opened and I’d already arrived there straight from work.

Now we learn that the guys are on at 9pm, which would be fine but there’s no support. So two hours to kick one’s heels with only some really bad lager for company. No support is unforgivable really. How many local artists would have played for nothing? Plenty I’m sure.

The show has also been moved from 'The Library' to the smaller and cosier upstairs 'Temple' which is packed. Actually I think we're all here now, we’re just missing two people... I look at my watch, an hour to go... This better be good.

Evan and Juliana come on just after nine and spent the next five minutes tuning up while the PA continues to play. Couldn’t they have done that earlier...

16 years ago I stood Juliana up, well I didn't buy a ticket. I'd had what I hoped was a better offer and I'm still with that better offer, so it's looking like I made the right call. She and I had met up just the once before in October 1993 at Sheffield Poly or was it already Sheffield Hallam by then? But it’s a long time ago and I've not seen her since until tonight. We were both much younger then of course. Not that she seems to have changed much.

Finally tuning up is done and we’re off. Into Evan’s 'All My Life'. 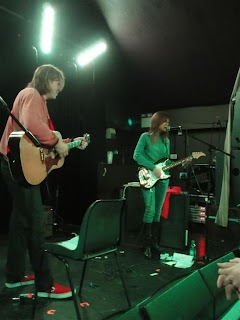 The two of them are old pals as well as musical collaborators. Juliana played bass and provided backing vocals for the Lemonheads back in the day while Evan briefly returned the favour by filling in on bass for Hatfield’s The Blake Babies. So there’s some crossover as they produce a selection of songs from both of their extensive back catalogues.

Occasionally they share the lead, such as when they cover The Velvet Underground’s 'Pale Blue Eyes' but usually they just back each other or as often happens simply let the other one get on with it and take centre stage. It’s an off-the-cuff format that works well.

In fact it’s so off-the-cuff that both ,but particularly Evan, have a plethora of crib notes scattered on the floor in front of him. Occasionally this off-the-cuff-ness degenerates something a bit disjointed and rambling but the evening is probably all the better for that. It’s a really relaxed evening unless you’re Juliana who does seem a bit nervous at times. I get the impression they haven’t practised together much, if at all, since they last toured together over a year ago. 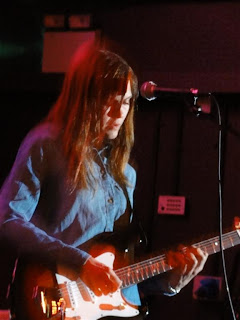 It’s a lot of fun with some very good natured banter between the two, making fun of Evan’s university days or lack of them, among other things.

The crowd throw multiple requests at the stage and they do their best to meet some of them. A shout for ‘$1,000 Wedding’ though, which is a Gram Parsons song they’ve covered before, is a step too far for Juliana. She recoils in horror, reveals a dislike of Gram Parsons and complains that she can never get Evan to take his records off her stereo. Then someone yells ‘Streets of Baltimore’ another Gram Parsons song. ‘Yeah, I’ll do that’ cries Evan, I think Juliana gives up at that point and disappears.

They seem to be totally making this up as they go along but I’m not complaining as Juliana chucks in ‘Ugly’ having previously given us ‘My Sister’. Playing it doesn’t go that smoothly though. She blames her guitar which she found in her mother’s garage and then apologises for blaming her tools, hating people who make excuses. 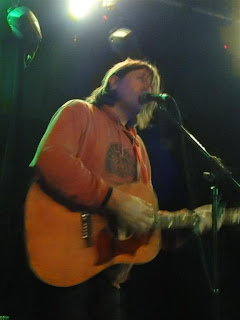 Then Evan was taking another request off the crowd with Juliana just telling him to give the people what they want while she puts her feet up. Cue ‘Laying Up With Linda’

The audience is pretty much split into two camps, Juliana fans and Ewan fans, with a bit of crossover. Evan’s ‘Into Your Arms’ and ‘The Outdoor Type’ win the singalong contest but Juliana offers some great highs too, ‘Candy Wrappers’, ‘Waiting For Heaven’ and a great cover of Teenage Fan Club’s ‘Cells’.

After a slightly shaky start, they seem to bring the best out of each other and what really shines through is that both have excellent voices. The only problem with the venue is the very subdued lighting. It’s not good for photography and I hate using flash. However Juliana likes it and complains when they turn it up, so back down it goes.

Then after a closing ‘My Drug Buddy’ they go off and the house PA comes back on. No encore?

After raucous protests from the crowd Evan reappears briefly before heading off to drag Juliana back. She appears alone and plays a slightly stumbling version of ‘Nirvana’ but she sees it through and then launches into ‘I Picked You Up’ all with Evan nowhere to be seen. 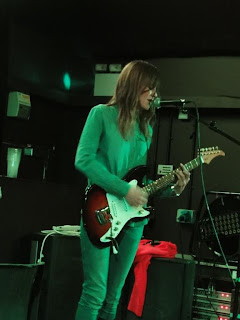 Then she goes and he appears to round off the night with a rousing ‘Big Gay Heart’. Then sadly it really is all over but a 24 song night, so all in all, a bit special.

Now I'm off home to that better offer.
Posted by FitForNothing at Thursday, November 29, 2012