And I Think I've Got Problems

And I think I've got injury problems... Apparently, reigning National Cyclo-Cross champion Paul Oldham crashed last weekend at an event in Macclesfield. He landed heavily on his elbow, forcing his shoulder to dislocate but no matter, he ‘managed to roll around and get it back in’. Then he continued for a while before deciding to pull out and save himself for another important event the following weekend. That’s hardcore. 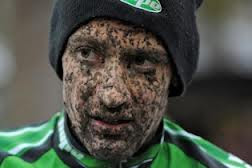 Apparently he’s used to it, ‘usually comes out in my sleep’ he says. Nice.

Which all makes my cycle in to work seem a bit tame by comparison, Sandiacre on tarmac isn't quite Macclesfield in the mud. Which is just fine, that's the way I like it. Although the rain does liven things up a touch on the way home.

L heads off to her book club in a short skirt, which apparently causes a bit of a stir. L has had two pairs of jeans meet a grisly death recently. One at the hands/paws of Doggo, the other courtesy of some wet weather induced disintegration. All of which means she having to do a lot of wearing of dresses and skirts recently. Which is a travesty obviously...