It’s FA Cup 3rd Round Day, which I’m excited about even if it’s not cool to be so anymore.

In a way it’s great that Derby are only charging a tenner for today’s game against League One leaders Tranmere. On the other hand it does gives out the message that the club think this is only about a third as important as a league game, so naturally they get about a third of the crowd. Is it really worth them charging a tenner? Wouldn't it be better for everyone if they gave it free to season ticket holders (sneakily upping the price of those by tenner perhaps) and thereby bagging a bigger gate, more programme sales, more food/drink sales, better atmosphere, loads of goodwill and good PR or is that just too obvious?

My Mum ducks out of this one, probably on the grounds that it's only a third as important as a league game, and as we were a bit late getting tickets we don’t end up in our usual seats. The ones we do get, four rows from the front, are actually better. As long as it doesn’t rain, which today it doesn’t.

In the evening we get the bus over to Derby, primarily to see a film we missed first time around ‘Sightseers’ at Quad. We eat at the Royal Standard before heading across to Quad. Thankfully we have booked in advance because the film is sold out, due primarily to them putting the film on a small screen called ‘The Box’ that we previously didn’t know existed.

It’s very rare that I find a film funny but ‘Sightseers’ was murderously funny, literally. Tina (Alice Lowe) is a mummy’s girl but she steps out of her sheltered life when her new boyfriend Chris (Steve Oram) offers to show her his world, Yorkshire mainly, by caravan. She is thrilled, her mother is appalled. Her mother doesn’t approve of Chris; she doesn’t know how right she is.

So the two set off for a romantic sightseeing getaway, him supposedly for inspiration for a book he's writing, her to get over the death of her beloved terrier Poppy who met a grisly but accidental death, on the end of a knitting needle. First stop Crich Tramway Museum. 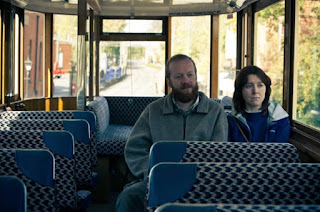 The only problem is that Chris harbours an angry streak and a low tolerance of other people. When someone threatens to report Chris to the National Trust his response is swift, deadly and quite unsettling at first for the viewer but you soon get used to it as several folk quickly breach Chris’s low threshold for annoying habits. Some of the scenes are not for the faint hearted, particularly if you’re in charge of PR for the National Trust. 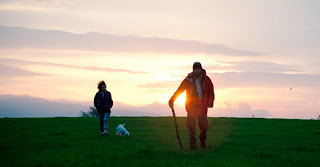 When Chris backs the caravan over someone who picked the wrong van to drop their ice cream wrapper by and subsequently has to wash the blood off the wheel arches, Tina cottons onto the fact that her new boyfriend literary ambitions are just a sideline to his serial killer ones.

She doesn’t seem unduly fazed by this discovery, declares herself his ‘muse’ and joins in; cue Soft Cell's 'Tainted Love' as the two of them leave a trail of dead bodies across several northern counties. Well it was either that or return to her overbearing mother. She even acquires herself a new dog to replace Poppy. 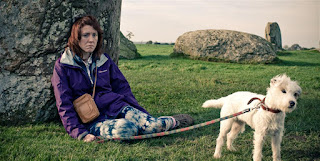 She does more than join in though, she takes over, which just has the effect of heightening Chris's insecurity which doesn’t aid the path of true love much and drives him into friendship with an equally weird chap who travels with a bicycle drawn ‘carapod’.

‘Sightseers’ is written by Oram and Lowe themselves both of who put in chillingly convincing performances. It’s full of understated dark humour, my favourite kind, with some of the most disturbing deaths you’ll ever see and it’s also very British. 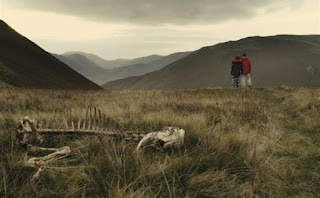 Yes it's pulpy, doesn't really go anywhere and has only really one joke but some films are better that way. It’s also smart enough to know that once the joke has run its course its time to wind up the story, which is done with an equally blunt finale.

See this and you'll never be able to look a caravaner in the eye again. Loved it, film of the year so far... well ok, so it’s only 5th January.