A Sting In The Tail


It always take around about a year for the pain of a Lakeland Trails race to dull enough in order for me to feel ready to enter another one. Today we are at the Staveley 17k race, which is where the Lakeland Trails Empire started out 10 years ago. So happy birthday.

They direct us to the car park from where we walk to the start on Staveley Recreation Ground, which takes us past the conveniently placed Hawkshead Brewery. Which is conveniently, at least for today, no longer in Hawkshead. I smile at it in a ‘see you later’ sort of way.

As we arrive, the 10k-ers are arriving back from their little bit of torture and the children’s fun trail was just setting off. Which looked temptingly simple and gentle because I’m not sure how fit I am for this.

There’s the dodgy knee of course and to make things worse, I hurt my back pulling some tents pegs out the other day. No idea how, and they say sport is how you get injured. Not true! That has taken a couple of days to recover but seems ok now...

As we register they hand us our souvenir technical t-shirts. They have a nice range of these for all their events. The only drawback being is that we have picked the only event with an orange one, again. They did this to us with Ullswater in 2011. 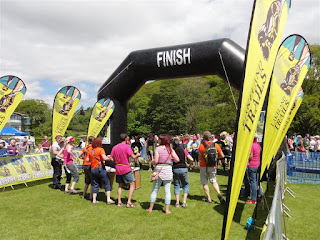 Then its 1pm, the Kookaburra All Stars Samba Drumming Band are in full drumming mode and L is about to start. She’s in the ‘Challenge’; I start at 2pm in the ‘Race’. Gulp. Before which the Kookaburras oddly go AWOL and then reappear short handed. Presumably the rest were still getting acquainted with the Hawkshead Brewery. 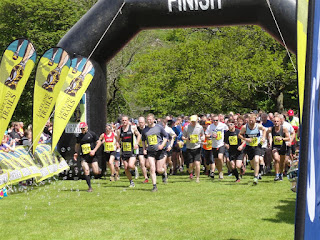 I sort of enjoy the race at first. It’s all uphill but the first few miles are on some blissfully un-Lakeland type tarmac. I bet L hated that bit. Even after then, it's the least rocky, least muddy race of theirs that I've done so far. It's also the hilliest.

When a marshal announces the 10k point I think phew, we’re over half way but no, he means it's 10k to go, not gone. Oh dear and my feet hurt. I probably have the wrong shoes on, I’m wearing very un-cushioned trail shoes but as the ground is so dry and hard normal running shoes would have been fine.

Near the end, they have promised us a ‘Sting in the Tail’. At first I think this is the sequence of unwelcome stiles across the last few fields but no. What they mean is the ascent of something called Reston Scar, which has a grinning photographer at its summit. I don’t grin back.

The plummet down from there to the finish is almost as painful as the climb up was. All that for a secret pudding from the Cartmel Sticky Toffee Pudding Company. Although this proves to be not so secret and is actually the chocolate one L got at their Christmas race. Still I would have given that up for more water and some sports drinks out on the course. It was very hot and I was parched because they only had two water stations out on the course.

I also couldn't find the water at the end and wandered around in ever decreasing dazed circles until L grabbed me and trust a cup in my hand. She was not a happy bunny either, mainly because she'd only just finished, having had an hour’s head start on me. Oops.

With the race complete, it’s a choice between the proffered complimentary dip in the River Kent or perhaps a dip in the brewery instead. No prizes for guessing what we chose. Let me introduce you to Brodie's Prime, almost makes it all worthwhile. 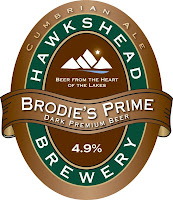 We even had chips and then curry when we got home. Naughty folk are us.