Find your next challenge here they said, so I did.

In fact I was very calm before my first open water swim. I’m not a hugely enthusiastic swimmer at the best of times but how much worse could open water be? Not much I reckoned. It’ll be colder, busier and choppier for sure but I was sure I could cope. Allegedly there’s also these water borne toxin things that L keep going on about but I’m sure you get worse things water borne in your local leisure centre’s pool.

So, you ask, if I’m not a massive swimming fan, why am I here? Well, I do have a slightly macabre fascination with triathlons and swimming is one third of those, which is rather inconvenient really. 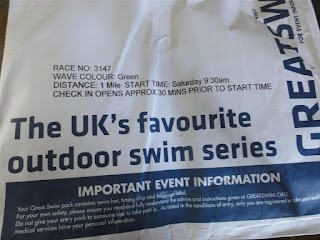 So here I am, trussed up in my brand new wetsuit with my better half smothering me with baby oil. So far so good then.

Then I don my green swimming cap. Indicating, coincidently, the same coloured wave as said better head was assigned to yesterday. A good omen perhaps? 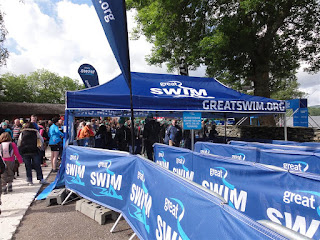 First they let us into the water for a warm up. This is misleading, what they actually do is herd us single file into a small fenced off square of water, a bit like sheep heading into a sheep dip and tell us to do a quick circuit. Only one side of this square of water is deep enough to be swimmable and three strokes got you pretty much all the way across it. So the warm up didn't achieve very much other than a fleeting acclimatisation to the water temperature.

That was long enough for me to ascertain that the water wasn’t cold, not what I call cold anyway. The girl next to me disagreed vehemently with that assessment but then woman have never been a very good judge of temperature. The official temperature reading was 15.2 degrees, which is approximately how I like our heating at home.

The briefing is brief and basically tells us to swim in a big circle keeping the bright yellow buoys on our right apart from the orange ones which you swim through, even I can do that. The safety advice is that if you’re in trouble, you are to float like a dead goldfish on the surface. Which presumably is the signal for somebody in a canoe with a huge fishing net to come along and scoop you out. Then there's an on land warm up to music, which is probably as exhausting as the swim is going to be.

We start and I start at the back. I figure overtaking will be easier than being overtaken. This strategy was one of many that turned out to be flawed and whenever I got up a bit of speed I tailgated the person in front. So it’s back to the drawing board on tactics.

Problem number two was that the wetsuit floats. I was aware of this phenomenon but it is not how I envisaged at all and I found it very hard to get my head down to do my stroke. When I did, I either performed the aforementioned tailgating manoeuvre or problem number three reared its head, I started choking.

I think possibly my wetsuit was too tight around the chest and neck making it difficult to breath. Although the waves washing into my face didn't help me perform the most accurate of analyses. I briefly flipped over on to my back and breathed in, before quickly flipping back onto my front again before someone with a big fishing net came along and scooped me up. Instead I told myself to grow up and try again but still ended up doing the swim using about 70% breaststroke, which actually makes it all a doddle but this was not how I intended to do this event.

Following the buoys wasn’t a problem, so I didn’t have any need to look to see if there was indeed a black stripe running along the bottom of the lake like there is at the leisure centre. It was probably too murky to tell anyway, you could barely see through the water at all and it would have been very difficult to surreptitiously eye up the girl in the bikini who’s swimming in the next lane. This wasn't a huge issue, as there was no next lane and there was no girl in a bikini. At least I don’t think so.

At half way I’m tempted to keep going to the nearby bank, get out, have a good think about what’s going wrong, maybe bang my head against tree and then get back in for another go but I don’t. Instead I complete the distance without too much trouble although at a considerably slower pace than what I had intended. I suppose 45 minutes isn’t too bad for a first attempt and I've survived, which is the main thing.

I sort of fist pump on my way out, yet L isn't even looking my way, she seems to be trying to get reception on her phone and is gazing with a worried look at a speed boat that's just brought an injured swimmer in. Ye of little faith. The speed boat, by the way, probably ruined my grand finale. I wondered what caused that big wave in the last 100 metres.

After that disastrous start to my first swim, what I probably need to do the most is get back in the water... oh dear.

Then it’s time for another battle with the ANPR cameras at the car park. The cameras have again missed our entry to the car park but have logged yesterday’s exit as our entry time. Luckily 6pm to 8am is free or else we’d be in for a big bill. I think I’ll sort this one out online when we get home.

We head back to camp, L can console me there. In the evening we try a different pub, The Engine Inn at Cark. It’s a bit more welcoming than last night and we can sit outside with the boys. The food is decent again but the beer range again a little uninspired. Nothing dark to deal with those toxins again.