The Longest Mile In History


The Loughborough Half Marathon starts and finishes in the Market Place in the centre of the town. As it’s a Sunday, street parking is free, so we can also park really close but despite this we leave the dogs at home. The weather might get hot, although there’s not much sign of this at 7.30am, at which time we are asked to be 'prompt' and to check in. If anything it’s a bit on the chilly side.

It was even chillier in March when the race was originally scheduled and snow forced a postponement. This also kicked off quite a bit of resentment as people who could not make the new date were refused permission to transfer their numbers to others. Odd, as this could have pocketed the organisers a bit more revenue in administration fees. Instead I imagine there were quite a few people running under numbers that were registered to others.

We guessed the 7.30am instruction was probably unnecessary but abided by it any way, yet registration does stay open right up to the 9am start. This does though give us plenty of time to pose with the Sock Man. 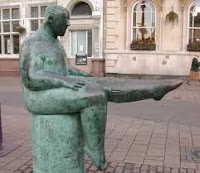 The race route takes us through the University, both on the way out and on the way back. Then through the Garendon Park Estate, which means a lot of gravel tracks which are not really to my liking. We emerge from there the other side of the M1 and somewhere near Shepshed. At least we now have tarmac back under our feet as we start on a long slow drag up a hill to Hathern. Now I like hills and this would have been a chance for me to gain many places but we were on a single track pavement with high grass on each side. So with no scope for overtaking it was just follow my leader up the hill, very frustrating. If only somebody could have persuaded the council to cut the grass we would have had room for a bit of overtaking.

After going through Hathern itself there’s another uphill section, this time on the grass, which also wasn’t very me. I felt a bit ill around about this point, which I put down to the gel I was quaffing rather than an aversion to the grassy section. So I changed to my spare one and promptly felt much better.

Around the course there were a fair amount of spectators, so the atmosphere was actually pretty good and it was well marshalled. Sadly, the drinks were in cups.

I enjoyed the run but throughout I had no idea what sort of pace I was running at due to the worst case of mile marking I’ve ever seen. As I religiously took split times at each marker, my watch’s assessment varied from my worst half marathon pace ever to my best. After only four miles and what I thought was a solid start, it appeared I was on for a sole destroying 1:50 yet a few miles later I was on for a life affirming sub-1:40 as I clocked up my ‘fastest’ mile so far on the ascent of Hathern Hill. Eh?

I reached mile 12 in 1:33, indicating a time of 1:41 could be mine, so I upped my pace and powered through the last mile. Which just keep coming and coming and coming. There was no end to it. Finally, after the longest mile in history and a massive eleven minutes later, I crossed the line.

To be sort of fair, they did warn us beforehand that the mile marking was not accurate but is there any excuse for them being so far out? It would not have surprised me in the slightest had I come across mile nine before mile eight.

So in the end I was three minutes slower than Sheffield, which sounds about right for this sort course.

The T-shirt had the original date on it, which was to be expected of course. The cardinal sin was printing everything on the back. The medal was ok but will go in the box with all the others. The goodie bag though was just full of leaflets and special offers which expired in April and May. You really would have thought they’d have refreshed the goodie bag after the cancelled race, if only to take a marker pen to the expiry dates.

We head home to the boys, chill out as usual and then eat at the former Willougby Arms in Wollaton (calling it the Wollaton in Wollaton just sounds daft) before crossing to the Wheelhouse where the beer is better.