Today 'Project 70.3' continues and I get up at ridiculous o'clock to watch the Nottingham Outlaw Half Ironman. The dogs are happy to accompany me but L is immovable in bed.

It’s an interesting recce as we join in with the big crowds who are watching. Poor old Doggo pretty much quivers with excitement from the moment we arrive, clearly expecting me to put him in the car boot and join in. Next year mate. 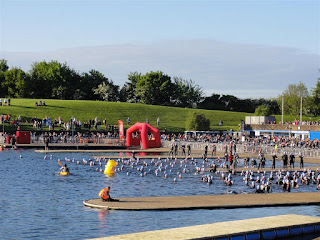 When L regains consciousness she texts to ask if I’m enthused by the swim. Of course not but I have certainly learnt many swim to bike transition tips. For a start it appears you can’t put lycra on when wet, so many of the athletes swam with it on under their wetsuits. Which will make it damp and therefore not warm, which surely would be the point of putting on arm warmers. Interesting. I definitely think I would need arm warmers for a bike section that start at 7.30am in the morning. 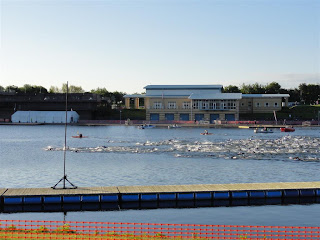 I did feel a bit sorry for the leader after the swim, who had a bike problem and needed a new wheel. This must have cost him 20 minutes but the he arrives back in 4th place after the 56 mile bike. Wow. 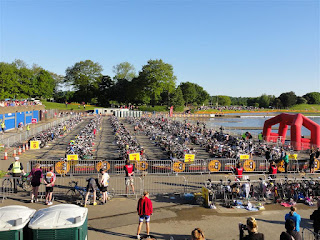 4:23 for the first one across the line isn’t too sluggish but he doesn’t win because someone from the second wave is quicker. I think they need to sort the starting order out a bit better for next year.

In the evening we head over to visit Son, now that we are allowed to, post-exams. Daughter is there waiting for us, having been dropped off by her father on route home from France.

It’s an entertaining evening. Son and his girlfriend are quite a double act and entertain us in the White Horse pub again, then on the journey home Daughter takes over with her one woman show. Turning her supposed holiday nightmare into a highly amusing stand up piece.