The Cross Bay Challenge is actually a full half marathon that crosses a tidal bay. I believe it is the only known race to do so. This year the race route has been reversed due to the tides or something technical and meteorological. Not that it makes much difference to us because we haven’t done the race in the opposite direction but this does seem to be a source of great excitement for others. For a start we were told it would be more scenic because we would be running towards the Lakeland fells rather than away from them and towards erm Morecambe.

As we have opted to camp only a few miles from the start, it is only a short drive to the finish line and we are directed to park on Cark Airfield, just outside the village of Flookburgh. Once there we make the dogs comfortable in the car, blacking out the windows to stop it overheating, and board a coach destined for Hest Bank in Lancashire, the start line. On the way we pass by Silverdale where a group of walkers will also be setting out on a shorter seven mile crossing.

At the start we register and are handed our race numbers, timing chip and a coloured wrist band, although I’m not exactly sure of the point of the wristband but they’re very keen we wear them.

It’s all very civilised and friendly at Hest Bank, where there’s a coffee van and a café. We discover the 11am start is delayed by half an hour, rumour has it the Kent Channel is too deep and needs the extra time to empty itself a bit more, so we plump to take on some caffeine at the café, in case this helps.

Then just before 11.30 I hand in my rucksack to the baggage van and we all troop out onto the sand. Then we’re off across Morecambe Bay with the sand under our toes.

It’s firm but wet sand, which gets wetter as we run though not one but a series of tidal channels, among them will be the already infamous Kent and its little brother the Keer. We are initially led by marshals on quad bikes. That is until they and the lead runners are out of sight, which takes a while. There are not many corners around which to lose sight of people on a beach.

The quad bikes are a replacement for the 13th century monks who used to act as guides to travellers because historically this was quickest route from Lancashire to Cumbria at low tide.

Each channel crossing seemed to get deeper but at most they are ankle deep. All quite manageable and I wonder if we’ve crossed the infamous Kent Channel yet. At just over half way I realise we haven’t because here it is. I think that rainstorm last night must have topped it up a touch.

So... just a simple matter of wading thigh deep through what to me appears to be the sea. Looking left and right there is nothing but water. Thankfully ahead I can see sand, I set sight for that. I resist the urge to dive headlong into the water and to swim for this patch of land. Although this would be a useful opportunity to try and improve on my dodgy open water technique after yesterdays experience.

One girl has the nerve to overtake me in the channel, going through the water as if it isn’t there. She grins at me and explains she does a lot of cycling. So do I and I can’t see how that helps. I try and emulate her stride pattern but probably just look like I’m inventing a new form of aquarobics.

Throughout there have been land rovers or squad bikes stationed at regular intervals along the course with water to drink and also mile markers. Although I fear that Mile 7 had been swept out to sea, if it existed, as it should have come amidst the Kent Channel crossing I think. Mile 8 came late, simply because if not, it would also have been lost at sea. Other than that the mile marking put Loughborough last week to shame.

We start to catch up a long line of people, trudging along like the Foreign Legion out on a mission. Except for the fact, that having a dog seems to be obligatory. I realise that these are the walkers. It also feels like we’re going uphill at this point, on an otherwise flat course, but I’m not sure that’s possible.

Finally we pass something called Humphrey Head and now we can see the finish up on the bank. As I cross the line, someone puts a medal around my sweaty neck and then I retrieve my rucksack, digging out some money to buy us a couple of t-shirts, which are only a tenner each.

I bypass the massage table and its long queue, for which my calves won't thank me later. I also sidestep the handily placed real ale tent and the hog roast, at least for now, and head off to locate where I parked the dogs. This turned out to be about a mile away or so it seemed. The boys and I get back just in time to see L crossing the finishing line. Afterwards we sit on the grass watching the rest of the runners come in, both of us with our hands around a Lancaster Blonde.

I have to say it was an excellent, totally original and quirky event. It was also very well organised but then I guess it needed to be. On what is certainly not a PB course, I was nine minutes down on Loughborough last week, which I think isn’t too bad at all.

Then it’s back to Grange, to take down the tent and then the drive back down the M6 to home. 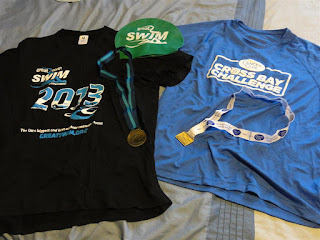