For Friday night we move back on to the mainland and stay at the Beinglas Farm Campsite near Inverarnan, us, several dozen Germans doing the West Highland Way and the midge population of Argyll and Bute.

It was a pleasant campsite, midges apart, it even has its own on site bar. No beer naturally but they did sell us a bottle of wine. Which we consumed, hiding from the midges, in the tent.

This is after we had eaten and drank at the famous Drover’s Inn. Pub of the year 1705 apparently. It still has the original decor and stuffed bear. The food is just average though and the beer was sadly only Deuchars IPA.

Then on Saturday morning we traverse the length of Loch Lomond, by car, before arriving at the southern tip and Balloch where the Great Scottish Swim takes place. I believe this is the first Scottish swim to beat both the weather and the algae, to actually take place. Although this is their first attempt at Loch Lomond. Which is also, according to the signs, 'Certified Unsuitable For Swimming'. 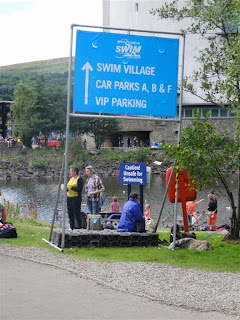 As I wait to start, at first I don’t realise that I’m stood next to Evan Thomas. 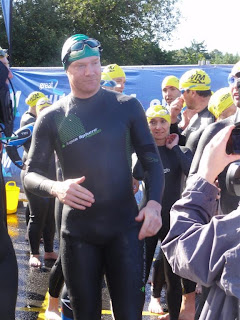 Then after L has pointed this out and asked me to take photos of him, I suddenly realise that I’ve also been stood next to Keri-Anne Payne, super open water champion babe, but was too busy biting my nails to notice. 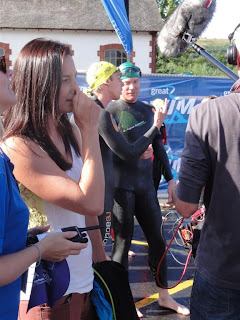 The swim itself is ok, as swims go. Actually I’m sure I swam well over a mile, so my half ironman distance of 1.2 miles shouldn’t be a problem. I get lost on the way out and get corrected by a marshal in a canoe. I get even more lost on the way back due to the sun being very low and totally blinding me as I swim back to shore. Simply following the pair of feet in front of me doesn't work, when another canoe based marshal paddles after him and turns him around until he's pointing in the right direction. Do they do SatNav for swimmers? 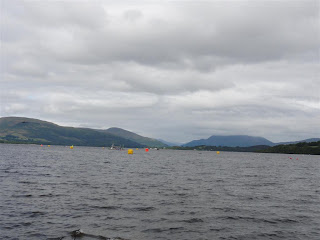 As I swim past a marshal actually stood in the middle of the loch, I realise I could have probably walked some of it. 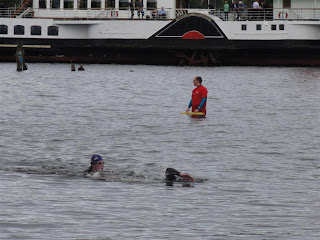 I’m quicker than at Windermere but a lot slower than at Nottingham, where there was the advantage of following the edge of the rowing strip to stay in a straight line and therefore I didn’t get lost.

Then we hand over the baton (the dogs) and L does her swim. A mile being a bit of a come down for her, she's used to doing two.

Then afterwards it’s straight back down the M74/M6 as we head home.