We spend the rest of the week on Tiree, which is a much odder island than Coll. For a start it is pretty much billiard table flat with about as many trees. 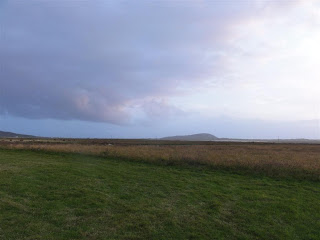 So you could probably see end to end of the 12 by 3 mile island on a good day. That is if there hadn’t been a fairly permanent mist hanging over the place whilst we were there.

Tiree is also allegedly the windiest place on the planet or something like that and holds the reputation as Scotland's premier wind and water sports destination. Neither of which float our kayak but it explains why most people have a board of some description on the roof of their vehicle. 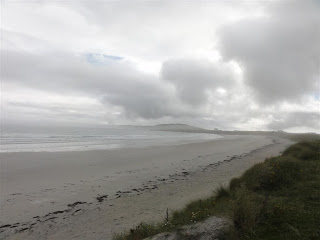 It’s not actually that windy whilst we’re there which causes a bit of head scratching for some on our campsite. Our neighbours even have time to get romantic between gusts.

We are camping at Balinoe on a rather well equipment campsite, that not only plays host to some of Tiree’s few trees but has a utilities room comprising of cooker, microwave, toaster, fridge and freezer etc as well. None of which we actually use.

The site only has one indoor bathroom but also has several portaloos and portashowers but these were fully plumbed in, running water versions. All of this we thought we were perhaps getting for free, less our deposit, until the campsite owner turned up like magic, like Mr Benn, on our last day.

The free Wi-Fi does come in useful to keep in touch with the outside world, fantasy football and to try and find out where to eat. There’s a distinct lack of tourist information on the island.

The best option for food and drink turns out to be the Scarinish Hotel. The food there is decent and although they have no real ale they do serve a mean bottle of Colonsay 80 Shilling from the smallest island in the entire world with its own brewery. Apparently the brewery employs ten per cent of the island's working population - Chris and Bob. We must visit them one day.
Actually, the Scarinish Hotel was really the only option for food and drink. There are a few cafes open during the daytime but the only other hotel, The Lodge, had stopped serving food when we got there at 7.30 one night and wasn’t at all welcoming, so we didn’t go back.

There was one other place, a restaurant on a remote edge of the island but this was closed when we attempted to visit it on the Tuesday. Then apparently we found out it was booked solid from the Wednesday right through into the following week.

So, the Scarinish Hotel it was then, four nights in a row, with the backup plan being the fast food van in the Co-Op car park. Yes they have a Co-Op but typically it was exactly the same as Co-Op’s all over the country, so there was no chance of finding any local produce in there.

When we weren't eating or drinking, we spent our time walking, chilling and trying to spot the Skerryvore Lighthouse from the visitor centre on the island. Until we found out it was 12 miles out to sea...