Once More Unto The Breach

A 5am alarm call this morning as we all head over to the Blithfield Reservoir near Abbotts Bromley, Staffordshire. I’m competing in Blithfield Triathlon, Sprint version. L and the boys are along to support.


So a 750m swim, a 20km bike and a 5k run. While the last two parts are like falling off a log, the first part is a bit like falling into a reservoir. Which should at least involve swallowing less detritus that at Holme Pierrepont as in theory we’re swimming in tomorrow’s drinking water. 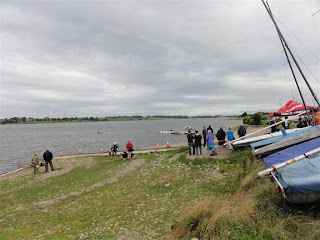 My swim is memorable, for the wrong reasons, again I can’t get my stroke going and I'm very thankful I’m not doing the Olympic distance as this would mean doing a second lap of the swim circuit. Note to self - when I do enter an Olympic distance race, make sure it’s not a two lap, the temptation to abort would just be too great. 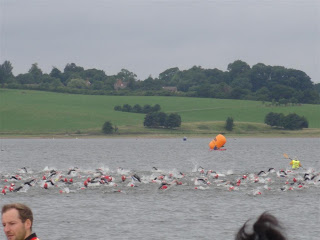 Thereafter I don’t rush transition, four minutes I believe it was, as I’m practising more for the longer distances than this one. Obviously I still need to work on the swim bit... I try all the kit I would use on a half ironman bike, probably putting on more layers that are perhaps necessary and also gloves which I wouldn't usually bother with in a sprint tri. As an experiment, wearing my calve supports under my wetsuit worked well. They are still in place and being wet doesn’t half their effectiveness.

I head out on to the bike course, which has been altered due to flooding and now includes quite a steep but short climb, which I love. It's a scenic route that also takes us back across the reservoir on a causeway.  As ever it takes 5 miles to get into the bike, which is almost half way but it goes well.

My transition to the run is much shorter; I even found some running shoes with elastic laces in the back of the cupboard which helps.

The run takes us along the edge of the reservoir and again upon the causeway before turning around as we head for home. It’s a flat run and would have been fast had it not been on a gritty, rocky track that makes me worry for my ankles.

Afterwards we sit on the grass by the finish, where L feeds me coffee and sausage sandwiches.

After heading home for a while, I head into Derby for the 4pm kick off against Blackburn. Derby’s first match of the season and one of the Football League’s 125th anniversary fixtures.

Derby, as ever, seem to throw away a winning position by trying to sit on their 1-0 lead for the last 35 minutes. It finishes 1-1.

L comes over to Derby and I meet her in the Royal Standard. Sadly no food is available here on a Sunday. It’s a shame that hardly anywhere does food on a Sunday now as it’s my favourite night to eat out.

After moving to the Flowerpot and getting some very decent beer we decide to head back to Nottingham to dine at the Savera Tandoori. Which is really very nice, if only the meal hadn’t been so massive. Indian meals are always so hard to judge.