It’s a Bank Holiday today, so the return to work is delayed another day. Yippee. A longish lie in and then I see if the dogs can remember the park. They can.

I also seem to have imported from Scotland a cold of some sort. Just a bit of a sniffle, I’ll run it off during the week.

In the evening we visit Son. He’s just moved into a new flat in Leamington but tonight we eat in Warwick, at the dog friendly Vine. 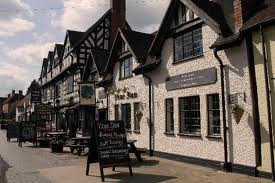 That is after we’ve picked his other half up from Warwick Castle where she works as a peasant...