We are booked on the early morning ferry which has a last check-in time of 6.15am, so it’s practically still dark when we take the charred remains of the tent down. The two hour forty minute ferry crossing to Coll is packed. Packed with runners that is, many who take the journey as an opportunity to catch up on their sleep. Others are tucking into their pre-race muesli but some are on the full Scottish. What the hell, it’s a 2pm race start, plenty of time to digest it all. We tuck in.

Once docked in port at Arinagour on Coll there’s a mad rush up the hill to the Race HQ and the temporary campsite on the local football field. As most are on foot, the car gives us quite a head start and we get there early enough to pick a decent spot. 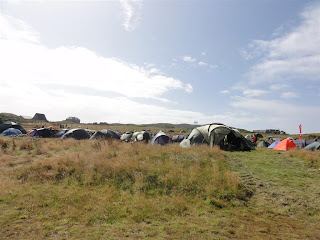 The day consists of four races. A half marathon, a 10k, a 5k and a kids’ race. Which, I think, are all scheduled to start at the same time from different places on the island, converging at the finish line at the community centre.

This involves everyone getting lifts to the various starts. My injury ravaged partner has opted for the 10k, so she disappears off in one of the minibuses. My start is down at the ferry pier, nearly a mile back down the road. With half an hour to go to start time the heavens open. Twenty minutes later and with the start now just ten minutes away we are all still peering out of the community centre windows praying for it to stop. At least we have shelter. I hear those dropped at the 10k start are not so fortunate.

Eventually with the race already almost turning into a 14 miler we hot foot it to the start where a brief, soundless, aerobic warm-up is in progress. At least the rain has now stopped and the sun is coming out. 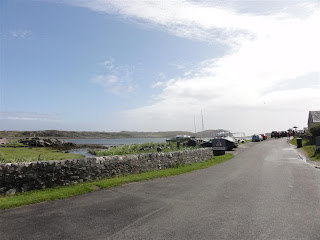 Moments later, we’re off. I punch start on my watch, which instantly turns black for a few seconds before rebooting itself and informing me it’s 00:00:00 on 01/01/01. Bugger. Flat battery or water damage me thinks.

Four miles done and my watch is telling me it’s 33 minutes past midnight, so at least I’m sort of timing myself. Not that it matters, I’ve already realised that this isn’t going to be fast.

Eventually we turn and the wind becomes sideways on but still we climb. Then we turn again, get the wind behind us and head downhill. We pass through the 10k start and along a path that runs through the sand dunes. It’s all quite pretty actually. I think I can actually enjoy this.

I overtake quite a few people in the second half of the race, apart from one stubborn *******, who after I’ve spent a whole mile reeling him in, suddenly has a Lazarus moment at the 13 mile point and sprints to the finish.

I cross the line in 1:48 where L is waiting for me, having survived her downhill 10k.

There is a great post race setup with various food stalls, a BBQ and real ale from the Fyne Brewery.

Later there is a Ceilidh with the band Trail West but by then we are pissed and up to our own drunken frivolity so we don’t join in.