A Fair Amount Of Faffing

It’s our first indoor winter dog show of the season today. Doggo opens things up with no sign of a limp. At least not from him, I’m a different matter. Mine will get a good test the first time I run MD.

When I do, we have the last pole down. It didn’t help that the last jump was about four foot from a wall and someone placed his lead in the gap. No wonder he slammed his brakes on and fetched the pole down. The perils of indoor shows in confined spaces.

His next run is clear but with a fair amount of faffing. We come 9th but he could have won that, faff free.

Doggo is clear in his ‘Allsorts’ agility. Which is a feat itself even before you take into account his Lazarus like recovery from Friday’s crippling limp because they leave the contact equipment on full height, which I’ve never seen them do before on an ‘Allsorts’ course although we don’t do that many. They’d certainly drop the heights for a Veterans class.

L takes the opportunity of our absence to do some painting at home, glossing whilst the hairy ones are out, the backdoor isn’t wide open and there’s no requirement to throw footballs at the same time. Now it’s time for us to head back to disrupt this, at least all the hairs are well plastered down with mud.

Then we head over to Derby where we eat in the Dolphin, then pop in the refurbished Bell for one before we head to the Flowerpot for a gig.

The test of an artist is often whether they can ‘pull it off’ when they’re up against it. Peter Coyle, it is probably fair to say, is up against it. He turns up tonight totally on his own, no band, no instruments and is at first mistaken for a roadie by the bulk of the audience.

So it is to his immense credit that he then swiftly gets everyone’s attention, and at the same time turns the entire venue into respectful silence, as he delivers his three minutes of fame from 1983, ‘The First Picture of You’, totally a capella. Coyle you see was the vocalist with the Lotus Eaters. A band that had great promise and even Peel sessions but despite several subsequent singles, they never really achieved another three minutes in the spotlight and Coyle went solo, again without making much of an impression. 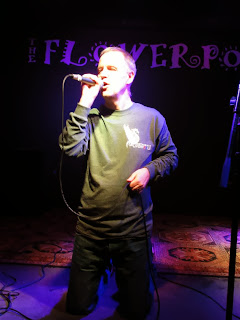 Thirty years on Coyle certainly still has that brilliant voice even if he does not possess either his own guitar (or keyboard) or perhaps the capacity to play one. Instead he fires up a backing tape and does karaoke for the remainder of his support slot. Faced with this, and the fact it’s all unfamiliar material, the majority of the crowd turn back to their conversations and their pints.

China Crises on the other hand arrive as a three piece and with instruments. The band's core has remained constant throughout their long career with Gary Daly on vocals and Eddie Lundon on guitar. They do introduce their keyboard player several times but I, amateurishly, don’t make a note of his name. 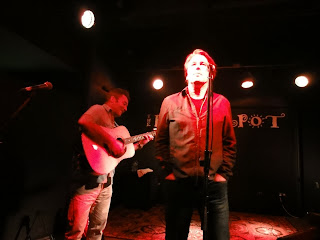 I look forward to seeing how this slimmed down line-up handles their back catalogue but I’m quickly disappointed as sadly, like Coyle, they also make heavy use of backing tapes. Thinking back now, I bet they always did to get all those twiddly bits into their songs for their live shows. 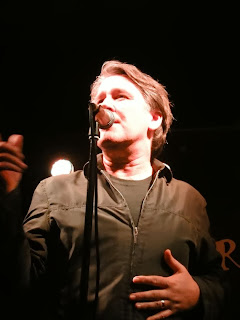 Two things are striking tonight as regards that memory. Firstly they’re now very at home in a pub (a downgrade deluxe), albeit a full one, and they play nothing from that excellent fourth album, sadly. It is, slightly predictably, mostly a hits set.

The start though is a bit more leftfield. First up ‘The Soul Awakening’ from ‘Working with Fire and Steel’ followed by ‘Temptation’s Big Blue Eyes’ and ‘Seven Sports for All’ from ‘Difficult Shapes and Passive Rhythms’ which Gary urges us ‘to get out of the loft’. As if I’d assign any records to the loft. 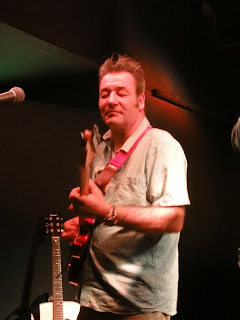 ‘Temptation’s Big Blue Eyes’ particularly is a surprise and they admit that this gem off their debut album remained pretty much unplayed for the last thirty years until recently.

Then it’s time to plunder their most famous offering ‘Flaunt the Imperfection’ for a clutch of tracks. ‘Gift Of Freedom’ and ‘You Did Cut Me’ are played without the tapes and with only the audience as backing. Resulting in a far less polished offering but the songs are the better for it. The whole point of seeing someone live is to see what they can do outside the comfort of the studio and not to reproduce everything in prefect CD quality. 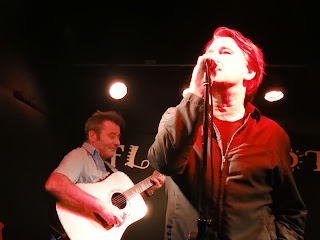 After that they revert to using the tapes and ‘Black Man Ray’ opens a run of all singles through to the end. Among them is a song which transports me back to Sixth Form College and starting my A Levels. Do I really want to go back there? Probably not, but a note perfect ‘Wishful Thinking’ does it anyway. Assisted by those immaculate backing tapes of course.

Peter Coyne reappears for the encore of ‘Here Comes a Raincloud’ from ‘Working with Fire and Steel’ but he leaves them to close what has been a pleasant evening on their own. Gary and Eddie have been chatty throughout, pleasant hosts, and we’ve even managed to overcome the language problems posed by their Scouse accents.

In fact the only track they don’t chat about and introduce is the last one. It’s also the only one the majority of the audience don’t know, as they close with ‘Diary of a Hollow Horse’ from album number five.

We close our own night with a swift one in the Royal Standard before getting the bus home.