The Ibis hotel that we’re staying in delivers a nice big bed, or perhaps it’s just the fact there’s only two of us on it rather than the usual four (including dogs), but breakfast is a complete washout. We are told breakfast is available until midday but at 10.30 there is practically no cooked food, seemingly rationing on almost everything else and no coffee as the machine is broken. Well, they do leave some sachets of Nescafe out so that you can make your own. Not great for £8 a head.

Then we do the educational bit of the weekend. We visit the People’s History Museum and the Museum of Science & Industry before falling exhausted and sort of educated into the Mark Addy pub in Salford. A pub with a riverside view across the River Irwell. 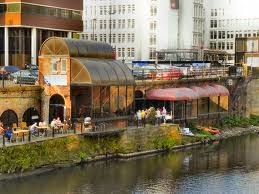 Mark Addy was a publican but also a Manchester born champion oarsman who rescued over 50 people from river back in the 19th century.

Next stop another pub, the City Arms right in the centre. Then after a stop for food at a noodle bar we head back to the velodrome for another evening of finals.

Becky James beat Anna Meares 2-0 in the sprint but that was only for bronze, with James already having been defeated by the typically Germany thighs of Kristina Vogel who went on to take gold.

Jason Kenny was mightily impressive in his keirin semi-final, winning with ease. The opposite was true in the final where he got himself boxed in at the back and finished fourth.

Having then watched his missus, Laura Trott, almost win the elimination race, we have expected to see Jason sobbing into his pint when we returned to the Sandbar later that evening but it was not to be. Also not to be was the Porter, which had unfortunately run out.