Oh How I Reminisce


More park and more clearing out. Primarily this time a large box of orienteering memorabilia, mainly maps. Loads of them. Oh how I reminisce. We ought to do some for old time’s sake or perhaps not, considering how much I used to complain about it. I do have a look at all the old orienteering websites to see what’s coming up but sadly it doesn’t seem to have become any more accessible. Which was partly why we gave it up in the first place.

We head over to Derby in the evening, eat at Quad and see a film there.

‘Like Father Like Son’ is about two Japanese families whose sons were swapped at birth by a nurse who was having a relationship crises and decided to make herself feel better by sabotaging other peoples’ lives.

It is six years later before it comes to light what has happened, as the boys are blood tested as they are admitted to school. Clearly this is some quirk of the Japanese education system. 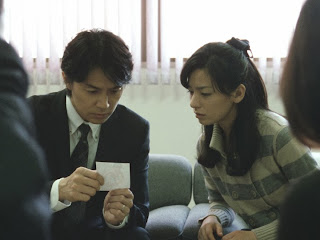 The film goes on to explore the impact on the two sets of parents as they get to know their ‘new’ son and eventually decide whether to switch children or not. 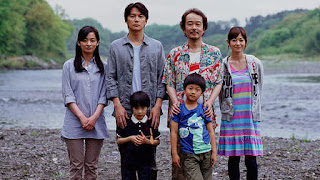 The two families are from contrasting backgrounds and have very different approaches to parenting. One is a wealthy family where the father Ryota is a high flying business man and the mother Midori is a bit of a doormat. He is rarely at home with either his wife or his son and it shows. He believes his son Keita should be independent as well as ‘talented’ and driven like himself. So he’s clearly baffled by his son's poor piano playing and his lack of desire to get any better. So it comes as quite a relief to him when Keita turns out not to be his son after all. 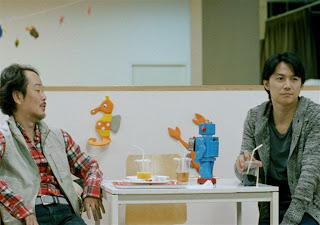 His blood son Ryusei lives with the Saiki family who are shop keepers. The father Yudai has a more relaxed approach to life and believes in giving his children as much of his time as they need. Ryota takes an instant dislike to him and even offers him money to take Ryusei off is hands.

It is not surprising that Ryota wants to switch. His wife isn’t so keen and contemplates running away with Keita.

It’s never really clear what Yudai wants but as they do the switch it quickly becomes clear that both boys favour Yudai which eventually brings Ryota round to reconsider his views and his priorities in life. 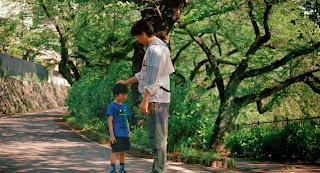 This wasn't a film I particularly expected to like but I did. It’s well made and all the performances are
top notch. Standby for the Hollywood remake.