He Really Should Have Gone For That Pint


The coffee machine has been fixed but the hot breakfast items again appear to be in short supply so we decide to go elsewhere for breakfast. We check out and when I point out my dissatisfaction with yesterday’s breakfast they take it off the bill, which was good of them.

We eat a full English in a large city centre pub instead. It was a Wetherspoons sort of place but wasn’t actually a Wetherspoons. The breakfast was much better than the hotels and much cheaper as well.

We get the train back home but having to change at Sheffield this time. Again we struggle to find a seat that isn’t reserved. I don’t really understand the system. People are free to reserve seats even though they might only be doing a small part of the train’s total journey or even to reserve seats when they may have off-peak any train tickets like ours where they might not even get on the train they have booked a seat on. I find it all a bit bizarre.

Once home, we head off to collect the dogs from the rescue centre. They haven’t been rehomed but have been health checked and bathed... Let me get this straight... they bathed Doggo and people still have limbs attached? Blimey.

Back home I catch up on the day's cycling, that we didn’t have tickets for and also the World Squash Championship which was also in Manchester this weekend and has been televised by the BBC.

Sheffield’s Nick Matthew wins the squash title and at the cycling Laura Trott adds her second gold of the weekend with an impressive Omnium victory which for once she had pretty much in the bag before the final 500m time trial after winning the Scratch Race.

Things will be a bit tense in the Trott-Kenny household though after Kenny failed to get through the qualification round of the sprint. He really should have gone for that pint in the Sandbar.

Becky James took silver in the Keirin, yes behind a German, Kristina Vogel winning her third gold and Jon Mould took bronze in the scratch race. 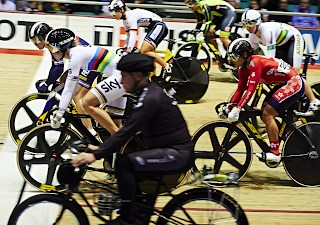