The Descent Into Blindness


The lumbago is much improved this morning, so L can be as rough with me as she likes. The dogs are rougher though, and very energetic as we hit the park.

After an annual check up at the opticians to see how my descent into blindness is progressing, I manage to watch Derby defeat Sheffield Wednesday 3-0. Then I meet L in Derby where we head to Quad.

‘Philomena’ is adapted from Martin Sixsmith's book ‘The Lost Child of Philomena Lee’ and is directed by Stephen Frears.

Back in the day, when she just a mere girl, Philomena Lee (played as a youngster by Sophie Kennedy Clark) had sex with a boy at a fairground, before she even knew what sex was. She also didn't know what a pregnancy was but she soon found out. As this was Ireland in the 1950s for this unforgivable sin she was locked up in a convent where she gave birth to a son, whom she called Anthony. 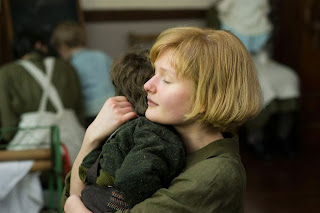 Actually she wasn't such a mere girl really, she was 18, but as I've already said this was Ireland in the 1950s and "the thing is, I didn't even know I had a clitoris." Which is what the older Philomena (Judy Dench) tells former BBC journalist Sixsmith (Steve Coogan) fifty years on. This is how Sixsmith, unsure of what to do after being sacked as a government adviser, apart from writing a book on Russian history, ends up doing a human interest story, something he thought was beneath him as he assists Philomena in searching for her son.


The pair of them head back to the convent where they confront the nuns to find out what happened to Anthony after he was removed from the convent at the age of three. The nuns weave a shroud of deceit to cover their tracks including telling them that all the records of the adopted children were destroyed in an ‘accidental’ fire. That is apart from the form they asked her to sign which waived her parental rights which has been lovingly preserved. 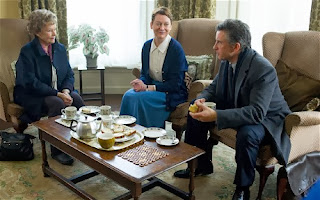 Sixsmith finds that a convenient conversation in the local pub is more help than the nuns. The landlord pours scorn on the 'fire' theory and tells them that aside from subjecting the inmates to what amounted to slavery, the convent ran a nice sideline in selling the girls' children to rich Americans. Which is what happened to Anthony.

Sixsmith makes use of his contacts in the USA and they both head over there to find out more. What they find is that the adopted Anthony was renamed Michael Hess and on the internet Sixsmith finds out that Michael worked as a high-ranking official in the Reagan administration, all the time hiding the fact he was homosexual and sadly died of AIDS nine years ago. 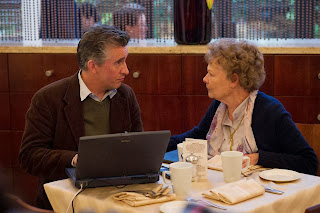 They track down and visit his adopted sister Mary, who was taken from the convent with him. Then they find Michael's partner who won’t at first talk to them but eventually Philomena convinces him to do so. He reveals that Michael did try to find his mother in Ireland and even went to the convent to speak to the nuns. None of which the nuns admitted to as they continued to blatantly lie even fifty years on. Also it was his final wish to be buried there.

So they head back to the convent again, see the grave, and confront the sister who was in charge back then, Sister Hildegarde (Barbara Jefford), who is still unrepentant. Philomena, incredibly, forgives her. FFS.

I’m impressed by the film. It's enthralling, not unduly sentimental and it doesn't have a happy ending, not really. Judi Dench is Judi Dench, of course, flawless. Steve Coogan, who is everywhere right now, is well... Steve Coogan. I’m still not convinced by his acting ability, he always seems very one dimensional and here he again appears to mainly play himself. 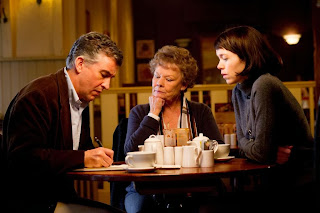 More to his style perhaps is the fact he co-produced as well as co-wrote the film but he does seem to have sneakily re-jigged Sixsmith’s book. The screenplay has turned the sequence of events on its head and in the process built a bigger part for Cougan. I don't think keeping to the original story would have made any difference to the impact of the film but it would have produced two leading actresses in Dench and Anna Maxwell Martin, who plays Philomena's daughter Jane and only a minor role for Cougan.


After the film we head to the restored Old Bell Hotel on Sadler Gate. Only the Tudor Bar is open at the moment but its mightily impressive and a far cry from the place that has been known as the local drugs den for all my drinking life.

We have a few drinks in there before moving on to the Flowerpot.