After taking them for a ‘final’ park session we drop the dogs off at Babbington Rescue Centre. We’re not actually giving them away, the Rescue Centre also has boarding kennels and it’s that they’re booked into, we hope.

It is cheaper than the old kennels but they are inside and don’t get a room with a view like at the old place.

Then we catch a lunchtime train to Manchester. I had pondered for a long time about whether to get the train or to drive. Somehow the train seems easier although the cost amounts to approximately four times the cost of driving, the only other saving being no parking fees to pay and I dislike trains...

Having arrived at Manchester Piccadilly, we find our hotel, the local Ibis, before going for a pre-Velodrome pint in the Sandbar. It's a Good Beer Guide recommendation (never go anywhere without it) which serves a mean pint of Porter and some decent food. 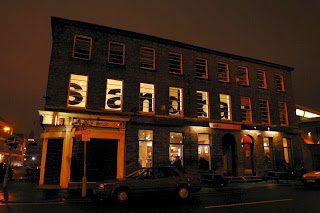 Then it’s a case of tracking down the Metrolink tram and heading out to the Velopark.

As sort of expected Great Britain win both the men’s and women’s team pursuits with the girls twice lowering their own world record for the all new 4km 4-person event with the women now riding the same distance as the men. 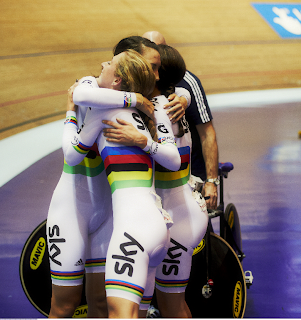 Dani King not only impresses in that but immediately goes back on the track to take 7th in the next event the 10k scratch race before returning for the pursuit medal ceremony with a change of skin suit required each time. In the same race emerges a potential new star, Scots lass Katie Archibald who takes silver.

The women’s team sprint duo take silver behind a couple of Germany policewomen with thunderous thighs, otherwise known as the Olympic champions. The men take bronze, again behind some bloody Germans.
With a thirst created after all that we tram back into the centre to the Joshua Brookes pub across the road from our hotel. Brookes was an eccentric clergyman, whatever that means. His pub's alright but it's not got the most eccentric of beer ranges.